The High Court has ordered CS Amina to testify in the FKF committee matter. 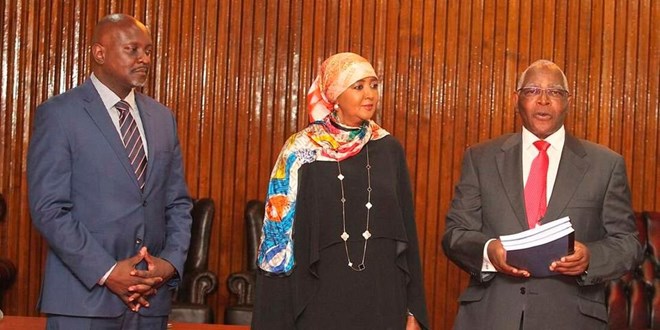 The High Court has given Amina Mohamed, the Sports CS, five days to file evidence in a complaint seeking to have the Football Kenya Federation (FKF) Transition Committee she appointed last Friday dismissed.

Joseph Kariuki Njenga contends that in renewing the Justice Ringera-led committee to oversee football operations, CS Amina breached both the Sports Act and the constitution.
The court papers must be served on the CS and Attorney General Paul Kihara, who have been named as respondents, within two days, according to Justice Ong’udi.

She directed the case be mentioned before Justice Antony Mrima on May 25, 2022 for further directions and fixing of hearing dates of the suit.

“Upon perusal of the petition and notice of motion filed by the petitioner (Joseph Njenga) dated May 13, 2022, I am satisfied they are urgent and are hereby certified as such.”

Upon receipt of the court papers, Justice Ringera’s committee has been directed to answer the issues raised by Njenga within five days.

In the suit, Njenga laments the appointment of the new committee, “is shrouded with secrecy and express violation of the principles of transparency.”

He accuses the CS of contravening Articles 10 and 232 of Constitution which requires observance of national values and good governance.

“The appointment was non-competitive/not-merit based thus a contravention of the principles of public appointments,” states Njenga.

He further claims Justice Ringera, Maurice Oyugi, Michael Michemi, Ali Amuor, Neddy Atieno, who have been named as interested parties amongst others, sdid not apply for the positions they were appointed, and that no interviews were conducted to test their aptness.

The freshly appointed committee has been mandated to oversee the management of the Football Kenya Federation (FKF) for a term of five weeks from May 11, 2022.

It replaced the FKF Caretaker Committee which assumed office on November 11 2021 for a period of six months.

Njenga pleaded to be permitted to serve the suit papers on the interested parties (Justice Ringera) and others electronically.