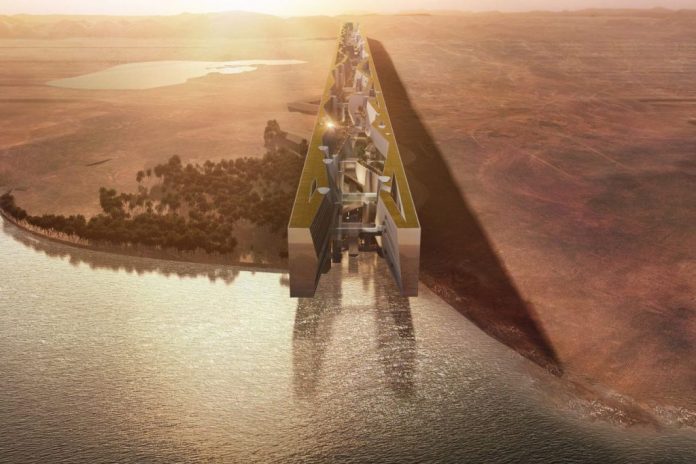 Saudi Arabia is embarking on an ambitious plan to build the world’s largest structure in the northwest of the kingdom, The Wall Street Journal (WSJ) newspaper reported, after viewing hundreds of pages of confidential planning documents that revealed for the first time the lay-out for the plan.

The structure, known as the Mirror Line, will be comprised of two glass reflective buildings measuring up to 488 metres (1,600 feet) high, running parallel for 120 kilometres (75 miles) across coastal, mountain and desert terrain.

The two buildings will be connected via walkways, and a high-speed train will run underneath them. The structure is expected to cost a whopping $1 trillion upon completion, and is projected to house five million people who will be able to travel end-to-end within a 20-minute stretch.

The documents seen are from 2021, and include concept designs such as integrated vertical farming, a marina for yachts, and a sports stadium built up to 305 metres (1,000 feet) above ground.

The structure is the epicentre of Crown Prince and de facto ruler Mohammed bin Salman’s zero-carbon smart city project called Neom, which will cost another $500bn to build and is the size of the US state of Massachusetts.

Neom is owned by Saudi Arabia’s sovereign-wealth fund and is part of a framework called Saudi Vision 2030, a plan that seeks to diversify Saudi Arabia’s economy and reduce its dependence on oil.

While the deadline to build Neom is 2030, the WSJ reported that an initial impact assessment of the Mirror Line produced in January 2021 said the development would have to be constructed in stages, and could take 50 years to complete.

The Mirror Line’s initial design is by the US-based Morphosis Architects, founded by Pritzker Architecture Prize winner Thom Mayne, and involves at least nine other design and engineering consultants.