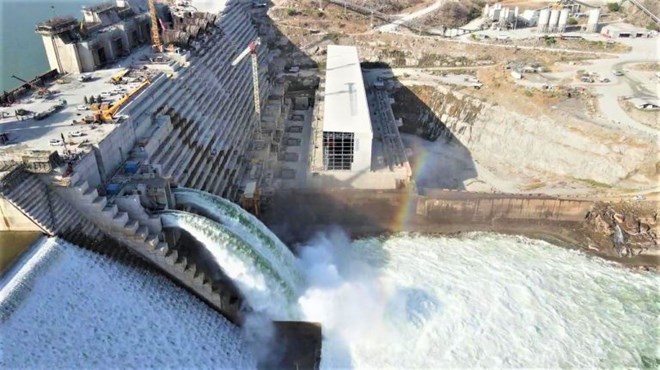 Somali President Hassan Sheikh Mohamud met with Egyptian  President Abdel Fattah El-Sisi on Monday at the presidential Al-Ittihadiya Palace in Cairo, where the two African leaders discussed development, red sea security and regional issues such as the construction of the Grand Ethiopian Renaissance Dam (GERD) on the Blue Nile.

In a joint statement released after their talks, President Sisi said he and President Mohamud spoke about the “danger of unilateral policies” when implementing projects on rivers that flow through multiple countries.

“We agreed on the dangers of unilateral policies regarding projects on international rivers, as well as the inevitability of commitment to the principal of co-operation and prior consultations among littoral states to ensure no damage is done to any of them,” the statement read.

Sisi added that the two leaders discussed Ethiopia’s need to consult regional stakeholders per international law and that a binding deal must be reached on the GERD filling operation.

A spokesperson for Egyptian President El-Sisi said that the meeting centred around the “historical and brotherly” relations with the two African nations.

The 2011 construction of the GERD has significantly soured relations between Egypt and Ethiopia, particularly after Ethiopia began filling the reservoir and has called on support from the international community to pressure Ethiopia to reach a legally binding agreement.

Ethiopia is an upstream riparian state whose highlands supplies more than three-quarters of the water that flows into the Nile River. Ethiopia argued that it retains the right to harvest hydroelectric energy to power its nation and benefit its people without significantly affecting the water flow to downstream countries.

Egypt, which relies on the Nile waters almost exclusively, argued that a 1959 agreement between Egypt and Sudan – which gives the two states complete control – regulated the allocation of Nile Waters, but Ethiopia has rejected this argument.

The Arab League, of which Somalia is a member, has called on Ethiopia to respect Egypt and Sudan’s Nile Rights and has called on the UN Security Council to intervene.

Somalia’s two main rivers – the Juba and Shebelle – originate in Ethiopia and flow through the southern part of the country, which is the breadbasket of Somalia.

The comments come as the US Special Envoy for the Horn of Africa Mike Hammer arrived in Cairo to meet with Egyptian leaders in an attempt to strike a deal on the GERD. Hammer will continue to Addis Ababa this week to hold similar talks with Ethiopian officials.

The last round of talks between Ethiopia and Egypt in 2018 failed.

Somalia gets $470M from US as ‘ravaging drought’ wreaks havoc