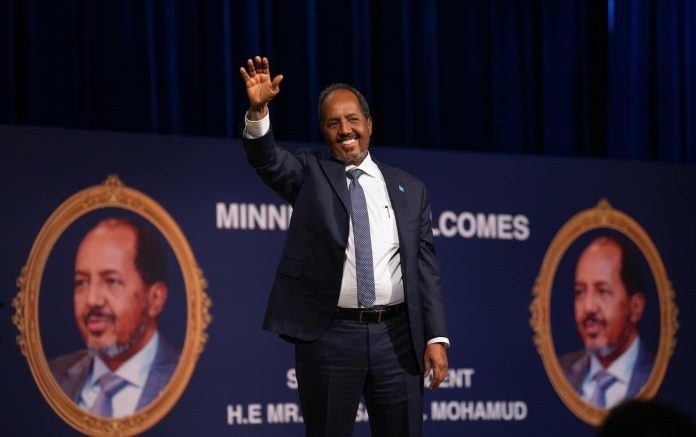 Thursday night, Somalia’s President Hassan Sheikh Mohamud will stop in Minneapolis after visiting Washington, D.C. The president, who was just re-elected to office, will likely discuss the conflict against terrorism in Somalia.

Mohamed Abdelle, a resident of Minnesota, said: “I am glad that he is coming here.”

“I’m glad the President came to observe how his people live in the United States,”.

The government of Sheikh Mohamud is engaged in combat with al-Shabaab, an Islamic insurgent organization. Al-Shabaab has been classified as a terrorist organization by the US. Al-Shabaab is a known affiliate of al-Qaida.

Sheikh Mohamud wishes to caution Somalis residing in Minnesota not to fall for scams that fund al-Shabaab.

Abdelle declared, “We are pleased with the President’s steps against these individuals. It is absolutely immoral to encourage anyone doing damage.”

According to U.S. Census data from 2020, Minnesota is home to more than 73,000 Somali people who were born abroad and domestically.

President Joe Biden hosted a gathering this week where several African leaders participated. The United States and African Leaders Summit was the continent’s first meeting with the American government since 2014.

The Biden administration declared that it will commit to sending $55 billion to African nations over the next three years in an effort to rekindle its ties with African leaders. According to detractors, this is a response to China’s expanding influence in Africa.