UNGA is informed by President Mohamud Somalia is devoted to battling global terrorism. 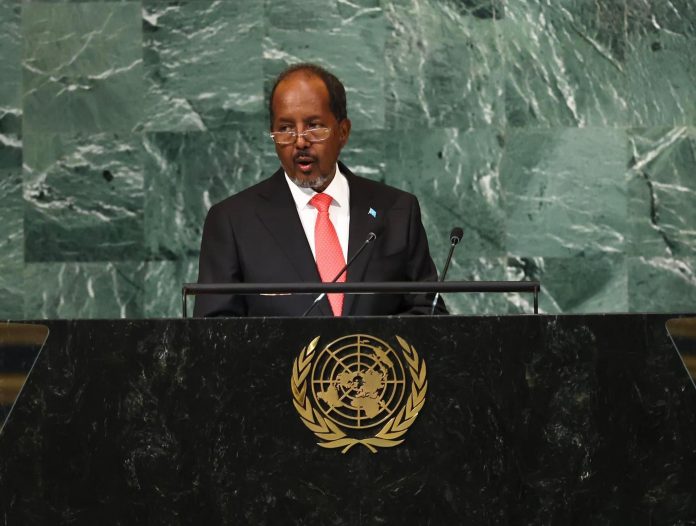 The president of Somalia, Hassan Sheikh Mohamud, told the UN General Assembly on Thursday that his nation was committed to the fight against international terrorism but asked allies to give up the containment strategy.

“It was an honor to speak at the 77th UN General Assembly session and discuss Somalia’s efforts to achieve peace and prosperity while overcoming international obstacles. To overcome our shared challenges, such as the war on terrorism, our community of nations must cooperate effectively.”

Al Shabaab’s current containment strategy, which aims to keep it out of government-controlled territory and out of neighboring nations, was slammed by Mohamud as ineffective and inefficient.
Queen

“The most crucial lesson we have taken away from the lengthy modern conflict with international terrorism and terrorism is that both cannot be stopped or diminished. Instead, it needs to be completely eliminated anywhere it is. This entails putting an end to it once and for all.”

Mohamud attributed the recent military victories over Al Shabaab in central Somalia to civilians’ and militias’ backing at the community level.

“Our administration will successfully eradicate terrorism from Somalia with increased public support, as the Somali people have now come to the realization that Al-oppressive SHabaab’s acts won’t stop until we all take steps to accomplish this. In a word, the Somali people now have faith that Al-Shabaab can and will be vanquished, and this is our actual source of motivation and energy as a government in the war against global terrorism “‘

Added he, “We have a proverb in Somalia that goes, “One finger cannot wash a complete face.” No obstacle is too great for us to overcome if we walk together.”

According to President Mohamud, Somalia is confronted with an equally dreadful triad of issues, including regionally persistent conflicts, global terrorism, and the catastrophic effects of climate change.

“These three interconnected obstacles are equally serious and immediately impede any progress, therefore I cannot pick between them.”