UPDATE: At least five people were killed in a blast near Mogadishu’s mayor’s office. 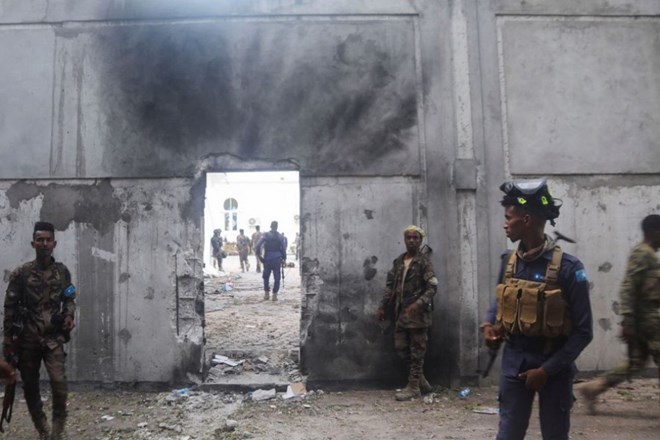 On Sunday, Islamist fighters detonated a bomb before storming a government building in Somalia’s capital, killing at least five people, according to the ministry of information.

Attackers from the al Shabaab group surged into the block that houses Mogadishu’s mayor’s office around noon and were engaged in a shootout with security personnel, according to the ministry and witnesses.

Security killed six militants and evacuated the area before 6 p.m., according to the ministry’s Facebook page.

Since President Hassan Sheikh Mohamud’s administration launched an onslaught against the al Qaeda-linked group in August, Al Shabaab has increased its attacks in a show of defiance.

“We were in the office when a blast deafened us. We were out of time. Then there was gunfire “Farah Abdullahi, a mayor’s office employee, told Somali Magazine

The head of Aamin Ambulance Services, Abdikadir Abdirahman, provided a higher estimate of the death toll, stating that the ambulance had delivered the bodies of eight civilian fatalities.

He stated that the incident injured at least 16 other persons.

The mayor’s office is at the local government headquarters building, which is located in a well-protected neighborhood of Mogadishu.

Concrete barriers and many roadblocks line the roads in the area. The structure is around 1.5 kilometers (1 mile) from Villa Somalia, the president’s office.

Al Shabaab said in a statement its suicide bombers hit, “then foot militants entered the building after murdering the building guards”.

The organisation, which has been fighting the government since 2006 and attempting to impose its own interpretation of Islamic law, carries out bombings and gun attacks around the country on a regular basis.

State TV for Jubbaland, one of the country’s semi-autonomous states, reported on Sunday that regional and Somalia federal forces had launched attacks on al Shabaab and taken control of the town of Janay Abdale from the militants, indicating that the government was expanding its offensive against the group into the country’s south.