Russia will return to negotiations after Ukraine’s surrender: Lavrov 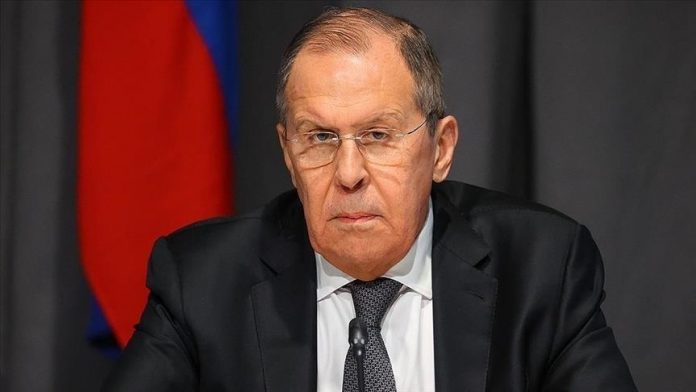 Russia will return to negotiations with Ukraine as soon as the Ukrainian armed forces surrender and lay down their weapons, Foreign Minister Sergey Lavrov said on Friday, day two of Russia’s military intervention in its smaller western neighbor.

Russia’s goal is to free Ukraine of “external management” carried out by the US and “Nazis,” Lavrov told a news conference in Moscow, echoing President Vladimir Putin’s earlier statement saying the attack aimed at the “denazification” of Ukraine.

“We’re ready for negotiations at any moment as soon as the armed forces of Ukraine respond to our proposal, stop resisting, lay down their weapons, — nobody is going to abuse them, nobody is going to oppress them – let’s return to our families and allow the Ukrainian people to decide their fate themselves,” he said.

Explaining Russia’s motives, Lavrov said Moscow had tried for eight years to address the Ukrainian crisis peacefully, through promoting implementation of the 2014 Minsk agreement while, in his words, Kyiv “sabotaged the process with the support of the West.”

Lavrov said nobody even verbally called on Kyiv to fulfill the Minsk agreement but instead put pressure on Russia, and “motivated the Ukrainian government to persecute everything Russian in Ukraine.”

“If the English language was prohibited in Ireland or the French language in Belgium, what would be the reaction?” he asked, accusing the West of double standards over what Moscow has called Ukraine’s persecution of local ethnic Russians.

“The Ukrainian people must be independent, must have a government representing all its diversity, free of external management, and in addition free of such a management that encourages genocide, and uses Ukraine as a tool to contain Russia,” he stressed.

“The chance to negotiate was on the table until the last, (and) Russia will return to the negotiations after the military operation,” he said.

In Moscow’s eyes, he said, it is “a regime under two external mechanisms of control, the US and Nazis.”

Lavrov argued that “nobody is going to occupy Ukraine,” insisting that Russia’s goal is “to demilitarize” and free the country of the “Nazi ideology that flourished in Ukraine in recent years.”

“Nobody is going to attack the Ukrainian people or treat in a humiliating way the Ukrainian military … No strikes are being carried out on civil infrastructure or personnel of the armed forces of Ukraine,” he claimed.

The February 2014 “Maidan revolution” in Ukraine led to former President Viktor Yanukovych fleeing the country and a pro-Western government coming to power.

This was followed by Russia illegally annexing the Crimea region and separatists declaring independence in the Donetsk and Luhansk regions of Donbas in eastern Ukraine, both of which have large ethnic Russian populations.

As clashes erupted between Russian-backed separatist forces and the Ukrainian army, the 2014 and 2015 Minsk agreements were signed in Moscow after the intervention of Western powers.

The conflict, however, simmered for years with persistent cease-fire violations. As of February 2022, some 14,000 people have been killed in the conflict in eastern Ukraine.

Tensions started escalating late last year when Ukraine, the US and its allies accused Russia of amassing tens of thousands of troops on the border with Ukraine.

They claimed Russia was preparing to invade its western neighbor, claims consistently rejected by Moscow.

Defying threats of sanctions by the West, Moscow earlier this week officially recognized Donetsk and Luhansk as independent states, followed by the start of a military operation in Ukraine on Thursday.

Putin said the operation aims to protect people “subjected to genocide” by Kyiv and to “demilitarize and denazify” Ukraine, while calling on the Ukrainian army to lay down its arms.