Man City 2-2 Liverpool: What are their chances of winning the quadruple and treble?

After a thrilling 2-2 draw at Manchester City, Liverpool remain in contention for a historic four trophies. City can still emulate Manchester United by winning the three major club titles.

Pep Guardiola’s side leads Jurgen Klopp’s side in the Premier League by one point going into the final stretch. The Carabao Cup has already been won by Liverpool, and both teams are still in the FA Cup and the Champions League.

But it won’t be simple. If either side is to win the remaining competitions, they must play 14 games in 48 days, including the game at Etihad Stadium. 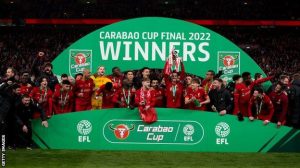 City’s four-year reign over the Carabao Cup came to an end earlier this season when West Ham broke their hold on the trophy.

Liverpool took advantage of the situation, winning their first trophy of the season with a penalty shootout victory over Chelsea in February.

The FA Cup is a football competition held in the
One of the two teams will be heartbroken in their quest for immortality on Saturday.

Six days after their league match in Manchester, City will face Liverpool in the FA Cup final at Wembley (kick-off 15:30 BST).

On 14 May, the winner of that game will face either Chelsea or Crystal Palace at the same venue. 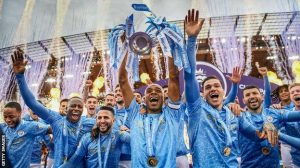 Both City and Liverpool have seven league games left after Sunday’s result, with four of them at home.

Only West Ham (sixth) and Wolves (eighth) are currently in the top half of the table of the teams City has left to play.

Steven Gerrard may have a say as well. Despite the fact that the former Liverpool captain has never won the Premier League, he can have a significant impact on this season’s title race.

On the 10th of May, the Reds will meet their former captain, now the manager of Aston Villa, at Villa Park, while City will play them at home on the 22nd of May.

“Both teams have seven games remaining, and we will not stop chasing now,” Klopp said. “Let’s make sure we’re ready for Benfica [in the Champions League] and this team at Wembley [in the FA Cup semi-final], and then we’ll see who comes out on top.”

Guardiola went on to say, ” “I believe we squandered an opportunity [on Sunday], but whatever the case may be, this is far from over. The same could be said for victory or defeat. We’re aware of our responsibilities.”

To refresh your memory, both City and Liverpool won their final eight games in the 2018-19 Premier League season, when City won by a single point on the final day to win the title by a single point.

Jordan Henderson, Liverpool captain, stated: “We’re well aware that they don’t give up many points. We must focus solely on ourselves in order to win as many games as possible. We have to be right behind them if they make a mistake.”

There was speculation before Sunday’s game that the winning team would go on to win the championship.

“I know people say whoever wins gets the title,” City midfielder Kevin de Bruyne added, “but it’s too hard, the schedule is too tough for both teams to win every game, but we will try.”

Manchester City’s most coveted trophy is the Champions League, which they have never won.

Guardiola’s team leads Atletico Madrid 1-0 after the first leg of their quarter-final tie, and will look to finish the job on Wednesday in Spain.

City will face the winner of Chelsea-Real Madrid in the semi-finals if they advance.

According to De Bruyne, “There won’t be much time to rest because we have a busy schedule ahead of us. Now we must defeat Atletico Madrid and qualify for the semi-finals, after which we will see what happens.”

Liverpool, on the other hand, is in the other half of the draw and is the clear favourite to advance on Tuesday, with a 3-1 lead over Benfica. In the last four, Liverpool will face either Villarreal or Bayern Munich.

City could set up a date with destiny on May 28… against Liverpool in Paris, if they reach their second consecutive final.

There are a lot of unknowns between now and then, but one thing is certain: we’re in for an exciting season finale.