15 people were killed in an Al Shabaab attack on a hotel in Mogadishu, including the owner. 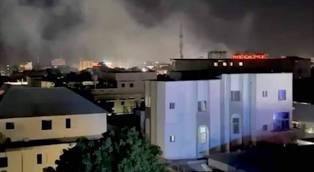 Heavy gunfire could still be heard coming from the hotel early on Saturday morning, but federal government forces were still attempting to break the siege.

Abdirahman Hassan Iman, the hotels owner is believed to be among the dead.

It was unclear how many Al Shabaab fighters participated in the attack.

“We were having tea near the hotel lobby when we heard the first blast followed by gunfire,” eyewitness Abdullahi Hussein told The Associated Press by phone.

“I immediately rushed toward hotel rooms on the ground floor and locked it (the door). The militants went straight upstairs and started shooting. I was inside the room until the security forces arrived and rescued me.”

On his way to safety, Hussein said he saw “several bodies” lying lifeless outside the hotel reception.

There was no immediate word on the victims’ identities, although information has slowly started to trickle out to family members.

Abdihadi Mohamed Sheikh Adan, a Somali-Norwegian working with the federal Ministry of Petroleum was among those killed, according to Sahra Abdi, a veteran Somali journalist with VOA.

Adan was a businessman and engineer who recently returned to Somalia.

Muhidin Warba, the regional NISA commander for Banadir, and an officer by the name of Mahad Korow were among the security personnel hurt in the attack. They were struck by grenades that the Al Shabaab terrorists threw onto the street from the hotel.

The last of the attackers was reportedly holed up on the top floor of the Hotel Hayat hours after the attack began.

After the incident began, guests of the Sahafi International Hotel, which was the subject of a similar attempt in October 2020, were locked in while security personnel roped off the nearby structures.

The Hayat, a popular hangout for federal government employees and other members of the political establishment, is close to the KM4 roundabout.

The first significant assault on a target in Mogadishu since President Mohamud assumed office in mid-May, the Islamist insurgency group Al Shabaab, has claimed responsibility for the strike on Friday.

In a statement published on a pro-Shabaab website, the group claimed that “a group of Al Shabaab terrorists forced their way into Hotel Hayat in Mogadishu and the fighters are carrying out random shooting within the hotel.”

The new president of Somalia, Mohamud, said last month that a military strategy alone would not be sufficient to put an end to the Islamist insurgency. He also proposed the novel concept of holding direct talks with Al Shabaab.

Al Shabaab fighters conducted a multifaceted onslaught into the Ethiopian border in recent weeks, which was later repelled, prompting worries about the group’s potential new shift in strategy.

The US has lately carried out a number of airstrikes on militants, including one that resulted in the deaths of 13 Al Shabaab combatants in the central-southern region of Somalia.

The group has gained authority over substantial portions of rural land in southern and central Somalia, but it has also begun to exert influence over populated regions that are under the administration of the Mogadishu-based government. It keeps carrying out devastating, high-casualty strikes against civilian and military targets, concentrating on convenient places like well-liked hotels and eateries.