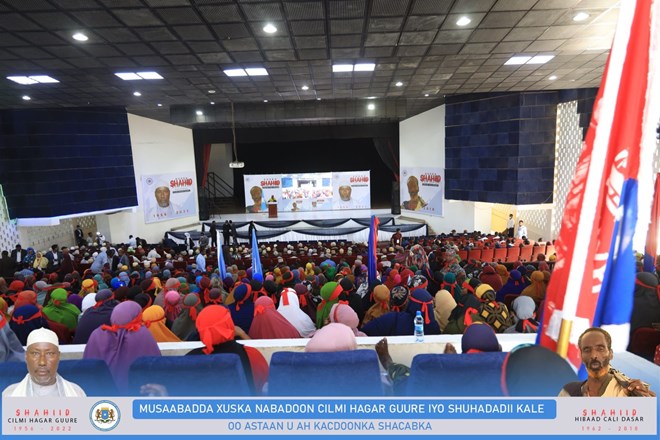 Elmi Hagar Gure and Hibaad Ali Dasar, two traditional elders who perished in the offensive against al-Shabab, were honoured at a memorial service on Saturday at the national theatre in Mogadishu.
In the Hiiraan and Middle Shabelle regions of Hirshabelle state, the two elders were in charge of organising the local populations against the militants.
The remembrance ceremony was organised by the federal Ministry of Internal Affairs, and Prime Minister Hamza Abdi Barre, Ministers, MPs, traditional elders, and various members of civil society all attended.

The participants paid tribute to the elders, soldiers, and government-supporting militia members lost during the offensive against the al-Qaeda-affiliated group al Shabab’s plot.

Gure participated in the Macawisley local militia, which fought alongside government forces against Al Shabaab.

During fierce fighting between al Shabab and locals in the Adan Yabal district of the Middle Shabelle region in 2018, Hibad Ali Dasar, a member of the neighbourhood who founded the militia groups known locally as Macawisley, was killed.

The current offensive, which has been dubbed as the most successful popular uprising against al-Shabaab in ten years, is thought by locals to have its roots in Dasar’s struggle from half a decade ago.

In the past three months, in the Hiiraan region of central Somalia, government forces supported by local pro-government militia groups liberated more than 50 villages and killed more than a thousand militants.
Masjid Ali Gadud and Burdacar villages in the Middle Shabelle region were retaken by Somali military forces with the assistance of local militia forces on Saturday after the militants had finished their retreat from the villages.

The state-owned news agency was informed by Daud Haji Irro, a spokesperson for the Hirshabelle administration, that the joint forces had complete control over the villages and that operations could continue until the militants had been driven out of the area.