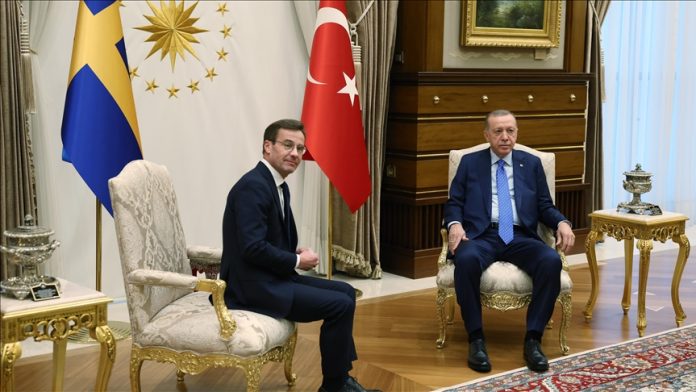 According to a tripartite pact between Finland, Sweden, and Turkey for the NATO membership of the Nordic countries, Ankara’s security concerns would be addressed, Swedish Prime Minister Ulf Kristersson told the media on Friday.

The security concerns of Turkey will be addressed as part of the agreement between Finland, Sweden, and Turkey for the Nordic countries’ membership in NATO, Kristersson emphasized.

Sincerity dictates that this is not a triple memorandum; rather, it is a security assurance made to Turkey by Finland and Sweden, according to Kristersson, who assured the newspaper Dagens Nyheter that the agreements would be kept.

In reference to his nation’s new anti-terror law, which is anticipated to go into force in the spring of 2019, he stated that Sweden and Turkey are in communication regarding the measure.

“This is the fact that Sweden is involved in the fight against terrorism together with NATO,” he added.

Sweden and Finland formally applied to join NATO in May, abandoning decades of military non-alignment, a decision spurred by Russia’s war against Ukraine.

But Türkiye voiced objections to their membership bids, accusing the two countries of tolerating and even supporting terrorist groups.

Stockholm and Helsinki struck a deal with Ankara in June, which requires them not to provide support to the PKK terror group and its offshoots, or the Fetullah Terrorist Organization (FETO) — the group behind the 2016 defeated coup in Türkiye. Ankara has also called for the extradition of terror suspects.

More than 40,000 people, including women, children, and infants, have died as a result of the PKK’s more than 35-year terror campaign against Turkey; the PKK is considered a terrorist group by Turkey, the US, and the EU. Its Syrian offshoot is the YPG.

Turkish leaders, including President Recep Tayyip Erdogan, have issued warnings that unless the pact is put into effect, Türkiye will not approve Sweden’s and Finland’s membership.

A nation cannot join NATO without the unanimous approval of the 30 current allies.