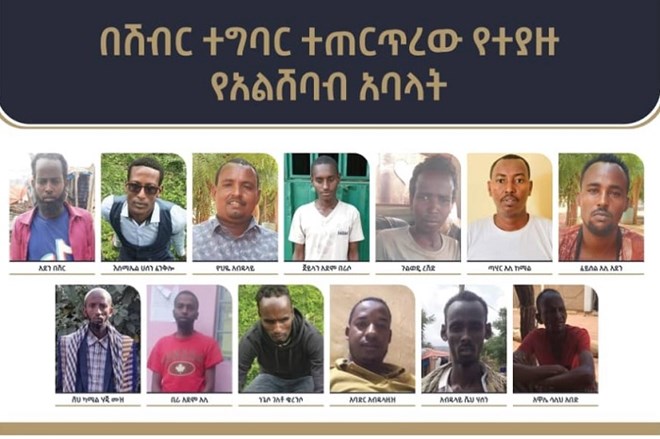 The National Intelligence and Security Services (NISS) of Ethiopia has announced the arrest of 34 Al-Shabab militants. Before making the arrest, the security agency appeared to be keeping an eye on the group’s plans to carry out a terrorist act.

According to ENA, official media, the Alshabab members were “making preparations to carry out a terrorist assault in Addis Ababa and several regions of the country” on Saturday, citing a statement from NISS.

The arrest of the individuals was planned in collaboration with Ethiopia’s Somali and Oromo regions.

The terrorist group planned to use religious holidays to carry out attacks on cities across Ethiopia, including Addis Ababa, as well as the Oromo and Somali areas.

10 of the arrests were made in West Arsi, East Arsi, West Bale, East Bale, East Shoa, West and East Hararge zones of Oromia regional state, and the remaining 24 were arrested Afdera, Dolo, Gode, Jijiga and Shebele on Somali region, according to a report by the state media.

From statements released at different times, there had been repeated attempts by the Al-Shabab group to execute terror plans in Ethiopia but none were a success so far.

National Intelligence and Security Services speculates another possible attempt and is calling on the public to be vigilante and cooperative.