A farewell reception was held for the Somalian envoy. 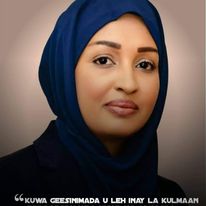 Islamabad: Somalia’s Ambassador to Pakistan, Khadija Mohamed Almakhzoumi, said she was leaving Pakistan on a high note and at a time when the two countries’ relations were improving. According to a press release, she made these remarks while speaking at Zafar Bakhtawari’s farewell lunch.

The lunch was attended by African ambassadors, former senators, and business leaders. In addition, officials from the Ministry of Foreign Affairs were in attendance.

After being elected to the Somali Parliament, Ambassador Khadija is leaving Pakistan after six years. She expressed interest in serving as Pakistan’s ambassador to Somalia.

‘As Somali Ambassador to Pakistan, I saw my role as facilitating contacts between economic players, getting them to know each other better and better interconnecting them,’ and I am pleased to report that I was able to bring the peoples of both countries closer together.’

Pakistan and Somalia were among the founding members of the Organization of Islamic Cooperation in 1969, she added (OIC). In the years that followed, and during the subsequent civil war, Somalia’s relations with Pakistan remained strong, with the Pakistani military contributing to a UN peacekeeping operation in southern Somalia.