A Lighting Fiber Internet in Somalia. 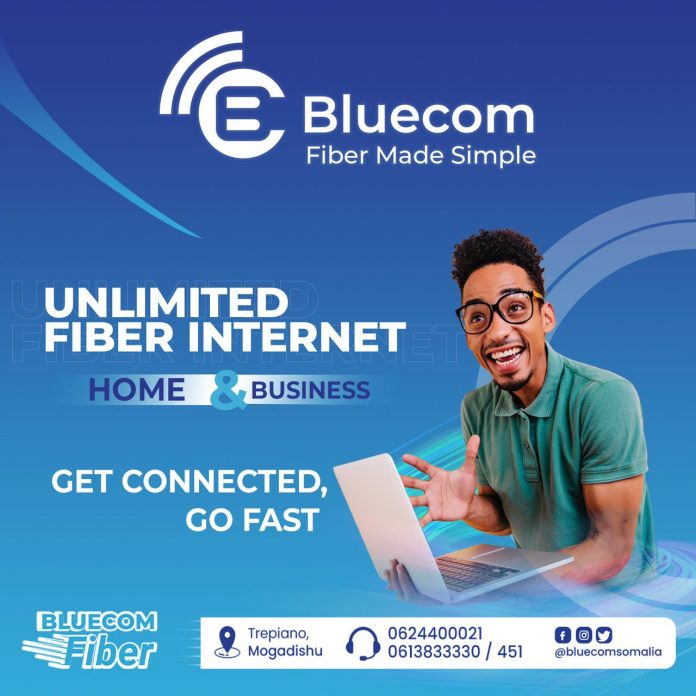 Bluecom, one of Somalia’s fastest fiber internet providers, has made previously inaccessible Somalia available to spectacular and quick internet. it has emerged as the most ISP company that can satisfy customers’ needs by providing its services to end users.

The most modern services ever made accessible in Somalia are FTTH, FTTA, and IPTV. More than 200 channels and other channels can be accessed using its fiber cable. Wow, this is amazing. I can access numerous services simultaneously with just one cable. Oh, I encourage you to get it and give it a try.

Bluecom has been striving to extend metro fiber networks over the entire country. For instance, the city of Mogadishu has deployed a more than 150-kilometer fiber-optic metro system. We can simply say that everywhere in the city is wired-up with Bluecom internet. Fiber Metro will now be able to help foreign embassies, private enterprises, and international organizations meet their internet needs. It has also been extremely active in the airport area. Additionally, the company’s capability and coverage in Somalia are demonstrated by the premise that it operates in various regions of the country at the fastest speed.

Customers were fascinated by describing their level of satisfaction. According to the customers’ feedback, they stated that they are delighted and have received a very high-speed service that meets their needs. Furthermore, the Bluecom services are commonly used by universities, businesses, the public sector, and hospitals for their daily operations.

Last but not least, Bluecom has only been operating in Somalia for a short time, but it has already gotten thousands of customers who are happy with the level of service they received. This underlines how desperately Somalians demand access to a reliable and quick internet connection.

As a result, Bluecom places a high priority to provide its customers super-fast and competent service while ensuring their level of satisfaction.