A massive fire breaks out on a crucial bridge connecting Russia and Crimea. 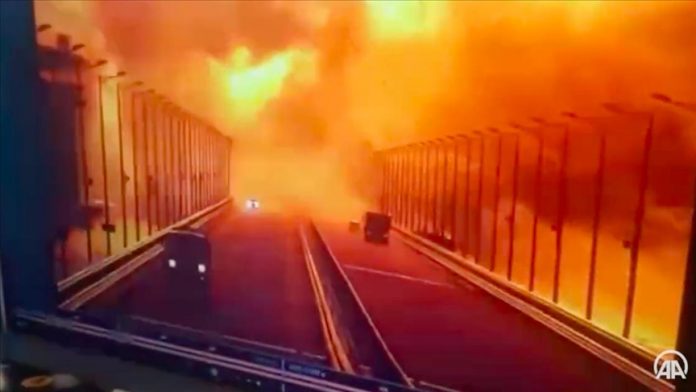 The longest bridge in Europe was burning while a road section was collapsing, according to video and images that were widely shared on social media.

According to eyewitnesses and video recordings, there was a huge explosion heard just before the massive fire started.

According to Kremlin Spokesman Dmitry Peskov, Russian President Vladimir Putin has ordered the creation of a state commission to look into the incident.

According to early reports, a fuel storage tank has caught fire, according to Oleg Kryuchkov, an advisor to the leadership of the Russian-annexed Crimea. He made this statement on Telegram.

“Arches that can be traversed unharmed. The time is not yet right to discuss causes and effects. Work is being done to put out the fire “Added he.

Mykhailo Podolyak, a senior advisor to the Ukrainian president, claimed that what happened on the bridge was only “the beginning.”

In a tweet, Podolyak added, “Everything illegal must be destroyed, everything stolen must be returned to Ukraine, and everything occupied by Russia must be expelled.

The Kerch Bridge, a pair of parallel bridges with a road and a railroad, was constructed after Crimea was annexed by Russia in 2014. It is a vital supply route for Russia.