A Somalian woman with stage three breast cancer has given birth in Hyderabad. 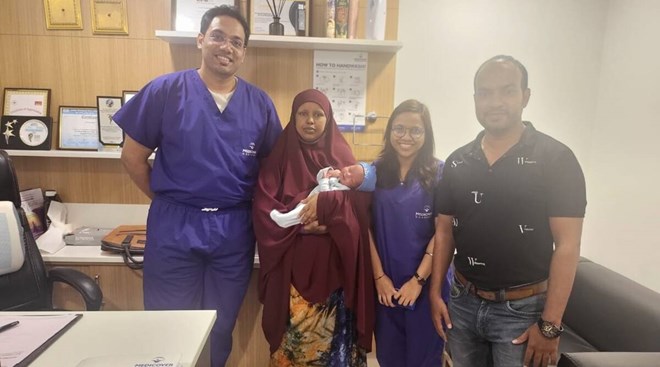 At a private hospital in Hyderabad, a 33-year-old Somali woman beat cancer and gave birth to a baby boy. She was 12 weeks pregnant when she was diagnosed with stage 3 breast cancer and advised to have an abortion. Doctors stated that she chose to have the baby, and that both the mother and the child are now healthy.

Fadumo Mohammad Omar of Somalia was diagnosed with locally advanced stage three breast cancer, which doctors say could have spread quickly. Dr. Saadvik Raghuram, a Medical Oncologist at Medicover Cancer Institute who treated her, said cancer would have eventually killed both the mother and the child.

advertisements
The Institute’s doctors took it on as a challenge to save the woman and her unborn child. She was given chemotherapy, and her and the foetus’s health were constantly monitored during the procedure. “Finally, she completed all of the courses of chemo and delivered a healthy baby boy,” the hospital said in a statement.

The hospital stated that saving the mother and child from a critical health condition was a near miracle, and that the mother and child were in good health. The woman gave birth two weeks ago and had surgery afterward. She will begin radiotherapy the following week. Dr. Raghuram told indianexpress.com that because she was pregnant and had stage three cancer, there was a risk of intrauterine death or foetal malformations. “Myelosuppression was an additional risk,” the doctor explained.

“With these considerations in mind, and after monitoring the foetus, she underwent three-weekly chemotherapy (once every three weeks) rather than a two-weekly regimen.” The course of chemotherapy was completed by the 36th week, but the baby was not ready for delivery. We had to bridge this period by giving her an additional course of chemo to keep the cancer under control. “She had a normal delivery in her 38th week,” the doctor explained.

He stated that there is a 30% chance of breast cancer recurrence, but that no treatment-related side effects are expected. “She should not feed the baby during treatment, but she may remain or spend time with the baby during radiotherapy.” “After three weeks of treatment, she should be back to her normal routine,” he added.