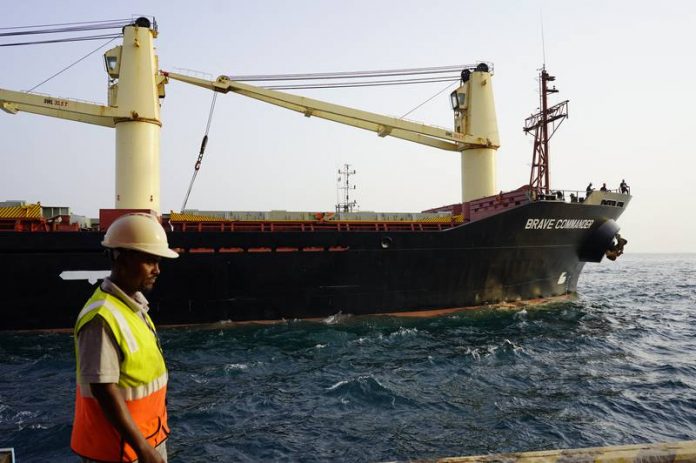 On Tuesday, a UN-chartered ship carrying 23,000 tonnes of Ukrainian wheat bound for millions of Ethiopians in need docked in neighbouring Djibouti.

According to the UN World Food Programme, the bulk ship MV Brave Commander arrived at the Horn of Africa port city two weeks after leaving a Black Sea port in Ukraine.

“The food on the Brave Commander will feed 1.5 million Ethiopians for one month,” said Mike Dunford, WFP’s regional director for East Africa.

“As a result, this has a significant influence on those who currently have nothing. And now the WFP will be able to meet their basic necessities.”

Ethiopia, along with Kenya and Somalia, is in the throes of a severe drought that has put 22 million people in the Horn of Africa at risk of starvation, according to the World Food Programme.

Due to the combined consequences of the violence in northern Ethiopia and drought in the Horn of Africa, the Afar region, the sole conduit for humanitarian convoys destined for Tigray, is experiencing a significant food crisis. AFP

The World Food Programme said the wheat from the Brave Commander was being sent to its facilities in Ethiopia.

It was unclear whether the delivery would be hampered by the return of fighting in the country’s north between government forces and Tigrayan rebels.

After Russia’s invasion in February, Ukraine, one of the world’s top grain exporters, was compelled to cease practically all deliveries, prompting worries of a global food crisis.

However, exports of grain, food, and fertilisers from three Black Sea ports resumed at the beginning of this month, thanks to a July deal reached by the UN and Turkey.

The accord eased a Russian blockade of Ukraine’s ports and established parameters for the transit of millions of tonnes of wheat and other food from silos and ports.

In a statement praising the ship’s arrival and Djibouti’s cooperation, US Secretary of State Antony Blinken stated that the US will “closely monitor Russia’s adherence” to the agreement.

“We call on Russia to end its war in Ukraine immediately, which would help to address the recent spike in global food insecurity,” Mr Blinken added.

More than 720,000 tonnes of grain have already left Ukraine, according to estimates released late last week by the Joint Coordination Centre, which manages the sea corridor.

According to the World Food Programme, the port of Djibouti is one of the key corridors it uses for its activities in East and Central Africa, carrying 960,000 tonnes of food items in 2021.

The Horn of Africa is enduring its worst drought in 40 years, and the UN World Meteorological Organization warned last week that a fifth consecutive failed rainy season will exacerbate the situation.

“There is still no end in sight to this drought crisis,” WFP executive director David Beasley said earlier this month. “We must get the resources needed to save lives and prevent people from falling into catastrophic levels of famine and starvation.”

According to the World Food Programme, famine is a “real possibility,” notably in Somalia, where over half of the population of 15 million is severely malnourished.

According to the World Food Programme, food insecurity and malnutrition are important concerns in Ethiopia, with an estimated 20.4 million people in need of food assistance, including those displaced by the conflict in the north and the severe drought in the south and south-east.

Northern Ethiopia has been at war since November 2020, when Prime Minister Abiy Ahmed deployed soldiers into Tigray to overthrow the Tigray People’s Liberation Front in response to what he claimed were rebel attacks on federal army bases.