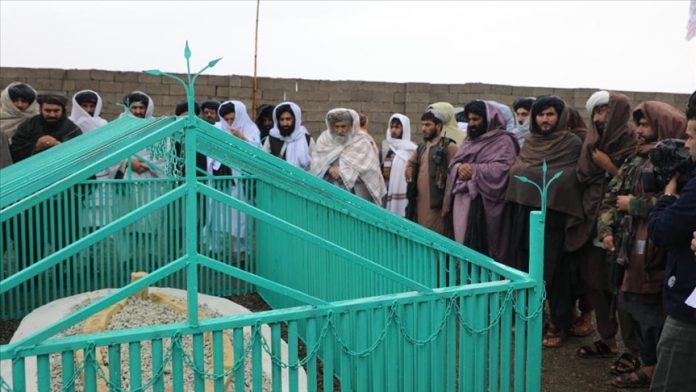 After nine years, the burial of Mullah Omar, the Afghan Taliban’s founding leader, was finally made public, according to authorities.

The upper echelons of the Afghan Taliban visited their founder leader’s mausoleum in the Suri region of Zabul province on Sunday for the first time in the open and then made a video and photo gallery of the place.

On August 15 of last year, the Taliban retook control of Afghanistan as international forces retreated and US-backed Kabul officials left the country.

“During the event, the grave of the late Amirul Momineen Mullah Muhammad Omar Mujahid was revealed. According to a tweet from Taliban spokesman Zabihullah Mujahid, the prime minister and members of the Cabinet visited the Amirul Momineen shrine in the Umarzo neighbourhood in Zabul’s Suri district.

Mullah Omar, a Kandahar native who started the Taliban organisation in 1994 and led it until his passing, was born.

While at the tomb of their commander, who passed away in 2013, the authorities also attended a prayer and Holy Quran reciting ritual.

After the US invaded Afghanistan in 2001, “he came out of Kandahar and was in Suri district in Zabul province. However, he spent 20 to 25 days in the Shinkay district before returning to the Suri region, where he remained until his passing, according to Omar’s son and interim Defense Minister Muhammad Yaqoob Mujahid, who spoke during the event in the province of Zabul.

His passing was kept a secret by the Taliban for two years; they finally announced it in April 2015.