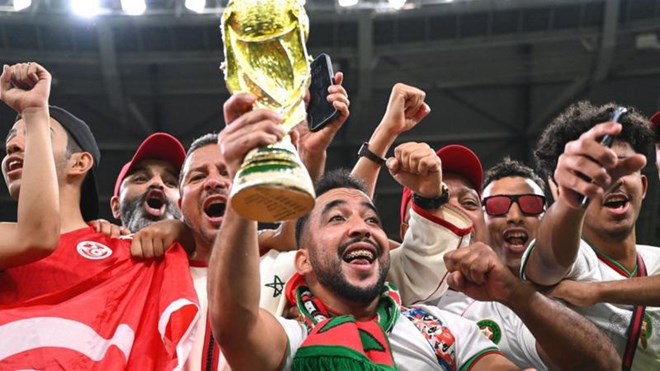 Africa will win the World Cup “within 15-20 years” says Morocco’s Walid Regragui, who has come closer than any coach to delivering that long-held aim.

Under Regragui’s guidance, the Atlas Lions became the first African side to contest a World Cup semi-final, where they were beaten by eventual runners-up France.

The 47-year-old believes that Africa will be bolstered in future by having more than five representatives for the first time from 2026 onwards.

“At the next World Cup, we’ll have nine spots which will allow us to learn more,” said Regragui.

“Within 15-20 years, I’m convinced an African team will win the World Cup. Because we’ll come back each time and learn more, and so our youngsters will have World Cup football in their DNA.”

Africa has had five teams at the finals since 1994 – an allocation considerably less than Europe (13), one more than a South America which has far fewer countries and level with Asia (when the continent is not hosting).

Yet Africa’s tally will almost double for 2026 and could reach 10 itself should one of its sides make it through an intercontinental World Cup play-off to decide the final representatives.

The continent’s sides have often struggled to reach the knock-out phase, failing to get any team through in 2018 and always delivering one since the 1994 expansion save for when two teams progressed in both 2014 and 2022.

“Our problem as African teams, without being too critical, is that we only have five spots, so that means Egypt couldn’t participate this time, nor could Nigeria, South Africa, Mali etc,” said the former Morocco international.

“So, each time, because we’re pitted against each other (to qualify), it’s more complicated (to build World Cup experience).”

Following Saturday’s third-place play-off defeat to Croatia, who have now finished on the podium in half the six World Cups they’ve contested, Regragui said their regular presence helps explain the remarkable record.

“(Jose) Mourinho – while he was at Manchester United – spoke about the DNA of the club, but I think this sort of thing exists for national teams too,” said a man who won the African Champions League earlier this year.

“Why are European teams always (at the latter stages of the World Cup)? Croatia – why did they beat us and get the third-place finish? Because they have more experience at this level, they always qualify for the World Cup.

“From participating in every World Cup, and playing these types of matches again and again, they let you learn, young players learn. It lets your players come back stronger the next time.”

After a creditable display at the 2018 World Cup – their first in 20 years – Morocco returned this year to register back-to-back tournaments for the first time since 1994-1998.

In Qatar, Morocco achieved their stunning progress despite taking on three of the world’s top-ranked sides: Belgium (2), Spain (7), Portugal (9), while also holding Croatia, 2018 runners-up, in the group stage.

“We’ve earned years’ worth of experience when you have the opportunity to play Croatia twice in a tournament, who are a top-three team in the world,” added the Morocco coach.

After conceding just one goal in their first five matches in Qatar, Morocco came undone when losing 2-0 to France in Wednesday’s semi-final, prior to Saturday’s 2-1 loss to the Croats.

Even though Regragui was bitterly disappointed about the failure to become the first African team to either reach a final or finish third, he expects the enormity of his side’s achievements to sink in soon.

“We’re disappointed but when we wake up, we’ll realise just what we’ve achieved,” he said.

“After the final, we will review things, and we’ll realise that Morocco’s campaign was extraordinary. Now, there’s going to be more pressure on us.”

The coach fully expects that the rest of the continent’s top sides will also come under increased scrutiny in future.

“There will be more expectations now for other African teams seeking to go on the same sort of run we achieved.

“Morocco has shown that (African teams) are capable and not far off (the top teams), so the difference between European teams and African teams is smaller than it’s ever been, and it comes down to the very small details.

“That’s going to be a real boost for African football.”