Al Shabaab is driving farmers into IDP camps, according to President Mohamud. 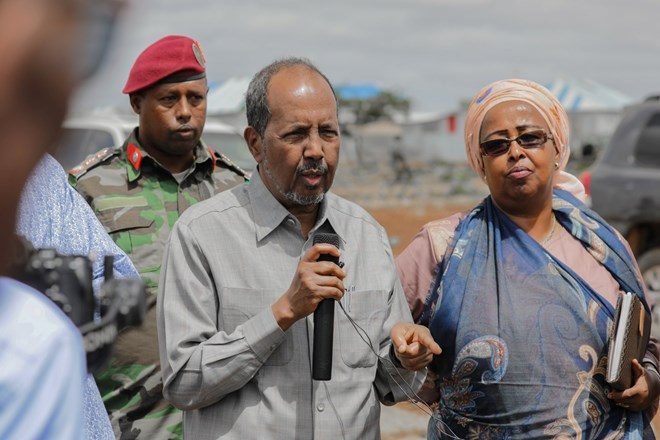 After refusing to allow people to farm, Somali President Hassan Sheikh Mohamud blamed Al-Shabaab fighters for forcing them to beg and rely on humanitarian help.

The president stated extremists had forced individuals to give up farming if they did not pay during an event in Badioa on Thursday night.

Mohamud paid a visit to the drought-stricken parts of Baidoa alongside Southwest state president Abdiaziz Laftagaren, where he listened to the IDPs and how the drought had affected them. The president was seen carrying youngsters into the homes of internally displaced persons.

“People with dignity, honour, freedom, and pride in their surroundings have been forced to rely on humanitarian help for fear of hurting themselves and their children,” he stated during his visit of the camps in Baidoa, the interim capital of Southwest regional state.

President Hassan Sheikh said the only way for Somalia is to fight al-Shabaab to restore the dignity of the Somali people.

Accompanying Somalia’s newly-appointed drought envoy on his first field visit on Tuesday, the United Nations’ top humanitarian official for the Horn of Africa country warned of the devastating outlook for millions of affected Somalis amidst heightened risks of famine.

Mr. Abdelmoula spoke at the ‘ADC’ camp for internally displaced people (IDP) in the Baidoa district of Somalia’s South West State. He was accompanying Somalia’s Special Envoy for Drought Response, Abdirahman Abdishakur, who was appointed by the Somali president in late May, on his visit to an IDP camp.

“The situation is extremely dire and grim: 7.1 million people will be affected by this drought situation before the end of this year,” said the Humanitarian Coordinator for Somalia, Adam Abdelmoula.

“Unfortunately, about 1.4 million children are facing acute malnutrition this year, and 330,000 are likely to become severely malnourished,” he added.