Al-Shabab: Islamist extremists assault a hotel in the capital of Somalia 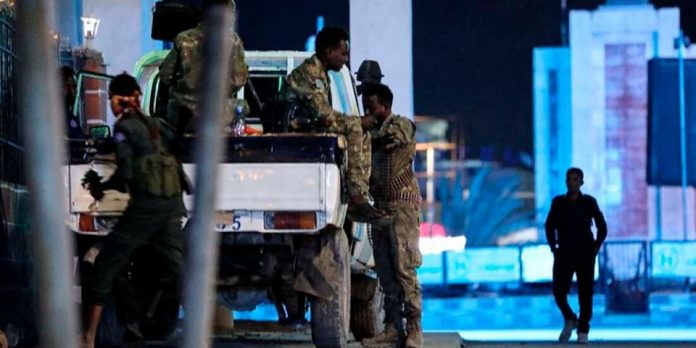 Al-Shabab, a militant organisation, claims to have taken over a hotel close to Mogadishu, the capital of Somalia.

According to the police, the terrorists set up two explosives outside the hotel before breaking in and starting to shoot.

The Islamist organisation claimed to be in charge of the compound in a statement and stated that they “are shooting everyone.”

The Hayat is rumoured to be a favourite meeting place for governmental employees.

Multiple fatalities have been confirmed, according to security officials, and police and army forces are exchanging fire with the militants.

Unconfirmed pictures making the rounds on social media appeared to show smoke coming out of the hotel as screams and loud noises are audible.

Two car explosives were aimed at the Hotel Hayat, a police officer informed the news agency Reuters. “The first one struck a nearby barrier, while the second one struck the hotel’s gate. We think the combatants are in the hotel.”

Al-Shabab, an al-Qaeda affiliate, and the federal government have been at odds for a very long time.

The group has been able to expand its influence into regions under the control of the Mogadishu-based government while still maintaining control over much of southern and central Somalia.

Concerns about a potential new Al-Shabab strategy have been raised by recent attacks on targets by group fighters along the Somalia-Ethiopia border.

Since Hassan Sheikh Mohamud, Somalia’s new president, was elected in May, the group has carried out just one attack in the nation’s capital, on Friday.