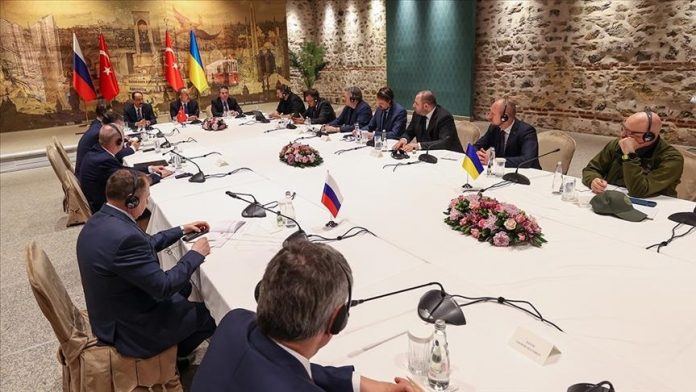 Since the beginning of its invasion of Ukraine in late February, Russia has been met with international condemnation. Many countries joined the Western sanctions, and private businesses in Russia ceased operations. Despite being a NATO member, Turkiye has had an unusual approach to the crisis. Turkiye did not join the attempts to punish Russia for its aggression, although loudly condemning its conduct and providing significant military support to Ukraine. Turkiye, on the other hand, actively explored ways to de-escalate the crisis by maintaining contact with Russia, Ukraine, and NATO partners. Despite some criticism, Turkiye’s efforts helped considerably to the progress of peace talks.

Why is Turkiye in such a great position to help bring peace to the region?

Turkiye’s strategic and commercial relations with Russia and Ukraine, as well as its membership in key regional and international organizations, have given it an advantage in supporting peace talks between the two countries. Turkiye was one of the original members of BLACKSEAFOR and BSEC, and is one of the major regional powers in the greater Black Sea region. The Montreux Convention of 1936 grants Turkiye jurisdiction over the straits, which are the only route to and from the Black Sea. It also has good relations with the Black Sea’s coastal countries.

Since the Jet Crisis in 2016, when Turkiye and Russia mended their damaged ties, the two nations have advanced their relations in a variety of areas, including defense, energy, and collaboration to handle regional conflicts. Turkiye’s first nuclear reactor is now under construction, and Russia is giving the country with an S-400 missile defense system. Turk Stream, which transports Russian natural gas to Europe, is one of the collaborative pipeline projects between the two countries. In addition to Syria, Azerbaijan, and Libya, Turkiye and Russia are involved in a number of other crisis-ridden regions. Russia is also Turkiye’s main natural gas provider, and the country receives 4-5 million Russian tourists each year.

Similarly, following the takeover of Crimea in 2014, Turkiye’s relations with Ukraine have vastly improved. Turkiye worked closely with Ukrainian authorities on the plight of Crimean Tatars, a minority in Ukraine and the autochthon nation of the Crimean Peninsula, after condemning Russia’s takeover of Crimea. The supply of Bayraktar TB2 type drones by Turkiye has been of great assistance to Ukraine in its fight against separatists and Russian forces. The two governments have also taken moves to collaborate on drone production. The importance of Turkiye as a regional power and its good connections with both actors aided in the move of the peace talks from Belarus to Turkiye.

Since the invasion of Crimea in 2014, Turkiye’s position toward Russia’s aggression toward Ukraine has remained consistent.

Turkiye has refused to join Western efforts to isolate Russia by imposing tough diplomatic and economic sanctions. Turkiye’s strong geopolitical and economic relations with Russia affected this decision. A more important purpose, as President Erdogan’s spokesman Ibrahim Kalin pointed out, was to keep the lines of communication open with Russia. Turkiye has made a sincere attempt to participate actively in the situation. Since the start of the crisis, President Erdogan and Foreign Minister Cavusoglu have been in communication with their Ukrainian counterparts. On March 10, Russian Foreign Minister Sergei Lavrov and Ukrainian Foreign Minister Andrii Kuleba met on the sidelines of the Antalya Diplomacy Forum. The meeting was notable since it was the first of its kind.

Turkiye’s continuing positive approach and active diplomacy made possible the March 29 meeting in Istanbul. Delegations from Ukraine and Russia met in Dolmabahce Palace and worked towards a final peace between the two nations. President Erdogan was personally present at the latest​​​​​​​ event in Istanbul and hosted the meeting, and his speech to the delegations from both countries received a standing ovation. In Istanbul, Russia agreed to reduce its military activity in Chernihiv and Kyiv while Ukraine offered neutrality in exchange for security guarantees.
The March 29 meeting in Istanbul could be a watershed moment in the Russia-Ukraine peace process. Turkiye demonstrated its importance as a major regional player in the Black Sea region throughout the crisis and its credibility in the eyes of Ukraine and Russia helped the progress of peace negotiations between the two nations. Turkiye’s status in NATO as a partner that fulfills its alliance responsibilities and contributes significantly to the resolution of global crises was also strengthened as a result of this process.