Analysts: Arab States Are ‘Washing Their Hands’ of Palestinians 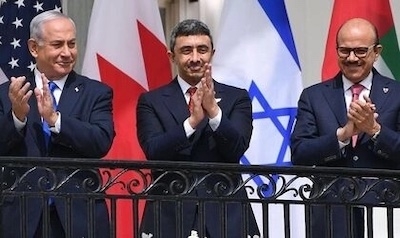 In what proved to be a snapshot of professional views of the Arab-Israeli conflict on the eve of war, Georgetown University adjunct professor and Middle East Institute (MEI) senior fellow Khaled Elgindy concluded that the “Arab world is sort of washing [its] hands” of the Palestinian cause during a May 3 MEI webinar. He agreed with his fellow panelists addressing “Arab-Israeli Normalization: A Viable Avenue Towards Peace?” that America and Arab states are prioritizing practical self-interests over an increasingly failed, violent Palestinian state project.

The panelists examined the implications of Bahrain, Morocco, Sudan and the United Arab Emirates establishing normal diplomatic relations with Israel during former President Donald Trump’s final months in office. These agreements initiated by Bahrain and UAE’s Abraham Accords have become only more remarkable in the days following the panel. The Iranian-supported Hamas terror group in Gaza renewed rocket attacks against Israel on May 10, firing thousands of rockets at Tel Aviv and other Israeli civilian population centers. Israel retaliated with airstrikes and artillery. UAE officials warned Hamas of sanctions if its campaign persists.

These Arab state recognitions of Israel “robbed the Palestinians of one of the very few points of leverage that they had vis-à-vis Israel,” noted Elgindy. Palestinians suffer “already pretty stark power asymmetry” with Israel. Given this “existential threat to the Palestinian national project,” he added, the “Palestinian response across the political spectrum was extremely negative.”

Richardson Center for Global Engagement vice president and executive director Mickey Bergman, Elgindy’s fellow Georgetown adjunct, argued that these Arab states had been “very opportunistic” in making deals with Israel. The panelists noted that Trump recognized Morocco’s claim to the disputed Western Sahara and delisted Sudan as a state sponsor of terror. Meanwhile, Bahrain and the UAE wanted closer ties with Israel and the United States, particularly given growing Iranian threats.

Focusing on the Gulf states, MEI nonresident scholar Mohammed Soliman noted that for them, “geopolitics is back.” Since Trump’s 2016 election, “America has less local capital and willingness to invest in a lot of problems around the world.” In particular, “America is leaving everything behind for the Indo-Pacific,” he noted.

“In order to reorganize the region in a post-U.S. dominated architecture,” analyzed Soliman, Gulf states “need to solve certain problems and realign with certain forces.” This precluded trying to resolve the interminable Israeli-Palestinian conflict with the moribund solution of creating a Palestinian state alongside Israel. “The current status quo cannot be sustained,” he explained, “based on a dream of having two-state solution soon.” As Elgindy concurred, “basically, what Arab states are saying is, we cannot simply wait around forever, either to pursue our bilateral interests or to pursue other geopolitical interests,” on “this unicorn called a two-state solution.”

By contrast, Gulf states seemed more interested in military alliances among themselves and with Israel to counter threats like Iran, said Soliman. “The idea of an Arab-Israeli NATO” goes back to President George W. Bush, and “we are getting there. It’s not a fancy idea anymore; however, it is going to take time.” Webinar moderator Joyce Karam, Washington correspondent for The National, noted that an “Arab NATO” was an “idea that was first started with Harry Truman” with initiatives that led to the failed 1955 Baghdad Pact.

Elgindy additionally cited the practical realities that facilitated Israel’s relations with Bahrain, Morocco, Sudan and the UAE. Unlike Egypt and Jordan, which made peace agreements with Israel in 1979 and 1994, respectively, this Arab quartet had never engaged in military hostilities with Israel. Correspondingly, several of these states have had “under-the-table relations with the Israelis anyway” and now merely “are consecrating an existing geopolitical order.”

Meanwhile, Arab states “will continue to pay lip service to two states because everyone needs some place to hang their hat” concerning a strategy for the Palestinians, observed Elgindy. Yet international actors are increasingly practicing “conflict management” and “risk aversion” towards the Palestinians, United States Institute of Peace Israeli-Palestinian Conflict Program, explained director Lucy Kurtzer-Ellenbogen. In tandem, she added, Israeli “trends are clear that the body politic has moved very much and largely to the right,” to the detriment of concessions to the Palestinians. This trend has only accelerated with the latest eruption of violence.

Yet even before Hamas’s latest jihad, Elgindy correctly faulted Palestinians for their plight, as the Palestinian Authority’s recent cancellation of long overdue elections—the first since 2006—further exposed the corruption of the P.A. dictatorship. The cancellation “is another sign of a, I don’t any other way to put it, but a bankrupt leadership, that has no strategic vision, that is incapable of even minimally doing what is required to put its own house in order.” “You can never really underestimate the Palestinian leadership’s dysfunction,” he added.

The election fiasco “is very much a self-inflicted wound,” said Elgindy, and Palestinians have “become their own worst enemies” by showing themselves unworthy of serious international consideration. This societal incompetence “is self-reinforcing” against Palestinian state aspirations, as Arab nations are “not inclined to want to move ahead with two states.” In this context, he chastised Israel, the United States and other countries for “opposing Palestinian reconciliation efforts” between the P.A. and Hamas, as if giving power to jihadist terrorists could solve anything.

The situational analysis of the Palestinian cause left Elgindy in a gloomy mood. Israelis continue to settle disputed West Bank territories, the historic Jewish heartland of Judea and Samaria, thereby continually limiting the extent of any future Palestinian sovereignty. “De facto annexation is happening on the ground as we speak, with nary a word of opposition” globally, he said; the situation “is deteriorating really, really rapidly.”

Yet what for Elgindy is Palestinian defeat is for others an Israeli victory over a hitherto implacable foe that has resorted to futile bloodshed yet again. After decades of Israeli resilience against Arab efforts to destroy the Jewish state, practical Arab governments are seeking mutually beneficial relations with Israel and abandoning extremist, rejectionist Palestinians. If this acceptance of reality spreads to other Arab states, perhaps one day even Middle East studies professors will follow suit.

Andrew E. Harrod is a Campus Watch Fellow, freelance researcher, and writer who holds a Ph.D. from the Fletcher School of Law and Diplomacy at Tufts University and a J.D. from George Washington University Law School. He is a fellow with the Lawfare Project. Follow him on Twitter at @AEHarrod.