Another 34 people are killed by raging floods in Pakistan. 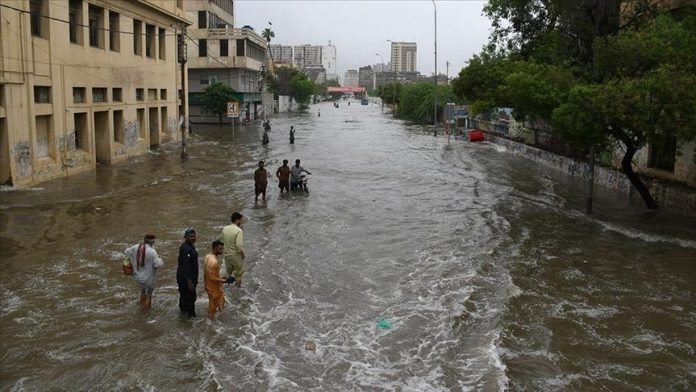 Swirling floods swamped several regions and towns across Pakistan on Friday, killing 34 people in the last 24 hours, according to officials and local media.

In southwestern, northwestern, and southern Pakistan, swollen rivers, streams, and dams burst their banks and rushed down hundreds of houses, buildings, and dozens of bridges and highways, cutting off several major cities, including a province capital, from the rest of the country.

The National Disaster Management Authority (NDMA), a state-run agency that coordinates between different relief and rescue organisations, said on Friday that the majority of the deaths were reported from southern Sindh, where 16 people died, followed by southwestern Balochistan, where another 13 people died in rain-related mishaps.

The remaining fatalities have been recorded in northeastern Punjab and northern Gilgit-Baltistan, which borders China.

The latest casualties raise the overall number of casualties to 937 since June 14, with approximately 1,400 injured across Pakistan, primarily in Sindh and Balochistan.

Authorities are concerned that the death toll will rise because hundreds of people are still missing, primarily in the hilly regions of Sindh, Balochistan, and Punjab.

Sherry Rehman, Minister for Climate Change, told reporters in Islamabad that 30 million of the country’s 220 million people are without shelter, with thousands of them uprooted and without food.

The rescue personnel, on the other hand, estimated the figure at “tens of thousands.”

According to accounts, at least 15 bridges and hundreds of dwellings have been washed away in the two provinces in the last 24 hours.

Fresh rains and floods have disrupted rail and road traffic between dozens of districts in the two provinces, including the Balochistan capital of Quetta and the rest of the country.

The telecommunications system has also been severely impacted in a number of districts and towns, with cellular and landline phone services still unavailable.

Senator Samina Mumtaz of Balochistan told reporters that some districts in the flood-ravaged province are suffering from severe food shortages.

In certain areas, army and air force flights are the only way to provide food, water bottles, and medicines to the stranded population.

Massive downpours and flash floods flooded rivers, rushed down houses, buildings, and roads, and produced landslides in the northern and southern districts of the northwestern Khyber Pakhtunkhwa province, which borders Afghanistan.

The picturesque Swat valley and neighbouring Dir and Buner districts, as well as Dera Ismail Khan’s southern district, have been most damaged.

Several footages aired on local channels depicted horrific sights, illustrating the true enormity of the disaster, which is thought to be greater than the 2010 floods, which submerged a fifth of Pakistan and killed over 2,000 people.

As shocked pedestrians stared on from a distance, gushing floods ripped over houses, restaurants, and businesses situated on the river banks in Swat.

Muddy rainwaters flowed over Quetta’s streets, washing away motorbikes, TV sets, refrigerators, and other home items, while inhabitants on rooftops stood helplessly by.

Floodwaters in Balochistan wiped out a 140-year-old antique railway bridge.

Hundreds of stranded individuals were spotted wading through waist-deep water to safety in Dadu, Badin, Sanghar, Ghotki, and other Sindh districts. Many of the men were carrying items on their shoulders and heads, while the women were cuddling their little children and straining to stay upright.

Rainwater lashed against the roofs of homes in many low-lying places, turning the ground, streets, and even major highways into rivers.

Pakistan has already declared a national emergency and dispatched the army to assist the civil administration with relief and rescue efforts.

Meanwhile, in response to the prime minister’s request for help, international organisations and financial institutions have offered a $500 million emergency aid package for flood victims.

Meanwhile, in response to the prime minister’s request for help, international organisations and financial institutions have offered a $500 million emergency aid package for flood victims.