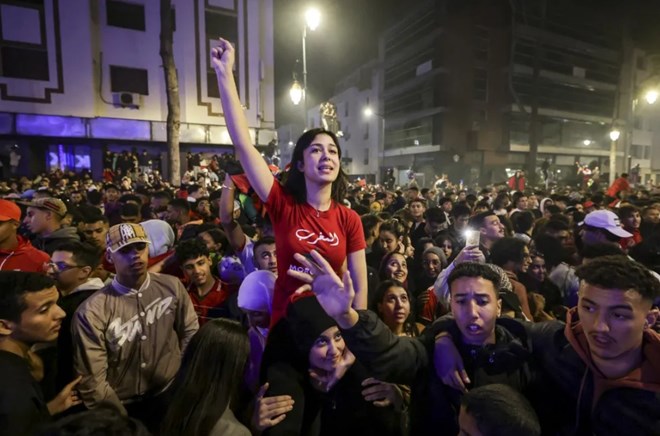 The Atlas Lions’ thrilling triumph over Spain triggered a celebration that extended well beyond their own country’s borders.

After the 90 minutes and extra time of the first World Cup in an Arab country ended in a scoreless tie, Morocco’s Atlas Lions shocked the 2010 champions Spain 3-0 in the round of 16 penalty shootout to advance to the quarterfinals.

On par with the U.S. defeating England in 1950, North Korea defeating Italy in 1966, and Senegal defeating the 1998 World Cup champions, France, in 2002, it is one of the biggest upsets in World Cup history. This one was exceptional, even in the current tournament, which has seen its share of unexpected results.

And it started a party that spanned far beyond the boundaries of Qatar and Morocco, with a large number of supporters dancing and having a good time.

The general sentiment was summed up by Moulay Ahmed Ben Mamoune, a supporter of Morocco, who remarked, “It’s incredible what we are experiencing today.”

“We would want to express our gratitude to the national team for giving us all this victory. Morocco always! Walid Regragui, the manager, be blessed “Hanae, another supporter, was added.

The celebration lasted for several hours outside the stadium.

Wijdan Faqiri remarked, “I cannot adequately express how I am feeling.

Even the Emir of the host nation, Qatar, joined the celebration, while back in Rabat, King Mohammed VI took to the streets to mark the historic occasion. The fervor and Arab pride were not limited to Morocco or Qatar, either.

Additionally, there were festivities in a number of locations, including Gaza, Oman, Libya, and Somalia. Sadly, some European towns, including Belgium’s Brussels and France’s Lille, saw clashes between Moroccan supporters and local law enforcement.

While other higher-ranked teams, like Spain, Belgium, and Germany, have already been eliminated from the World Cup or, like Italy, never even qualified for it, the Atlas Lions, who were placed 22 in the FIFA rankings prior to the event, are still in the competition.

However, Morocco will face a difficult test against Portugal on Saturday night, despite the fact that it may be the biggest surprise of this year’s tournament. Nevertheless, it is obvious that Morocco has already won, at least for its supporters, regardless of the ultimate result.