Argentina wins the World Cup with an incredible victory against France thanks to Messi. 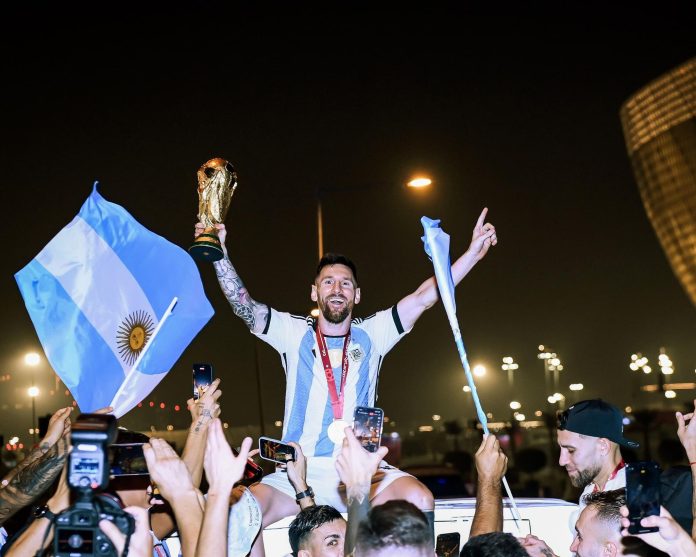 Argentina defeated France on penalties in a thrilling World Cup final on Sunday, and Lionel Messi ended his remarkable career with the sport’s top honor.

After a thrilling 120 minutes at the Lusail Stadium, the scores were tied at 3-3 thanks to Kylian Mbappe’s incredible hat trick twice, which forced the game to go to penalty kicks.

In the 23rd minute, Messi calmly converted a penalty after winger Angel Di Maria was fouled by Ousmane Dembele.

Then, in the 36th minute, Di Maria scored, capping off a beautiful move from close range to give Argentina a commanding lead going into the half.

Hugo Lloris of France denied them a third goal in the 58th minute when Julian Alvarez attempted a close-range shot.

With Mbappe’s first of what would be the first hat trick in a World Cup final in 56 years, France closed the score in the 80th minute.

A minute later, Mbappe scored his second goal, converting Marcus Thuram’s cross with a precise effort to tie the game at 2-2.

After normal time, the score was level at 2-2 after a superb Lloris block prevented Messi from scoring in injury time.

In the first period of extra time, despite numerous attempts, no team was able to break the tie.

In the 109th minute, after Lloris had stopped Lautaro Martinez’s attempt, Messi forced the ball in for his second goal of the game.

Gonzalo Montiel’s handball in the 117th minute resulted in another penalty for France, and Mbappe stepped up to convert it for his third goal of the match.

Martinez believed that Argentina’s victory was a result of “destiny.”

It was an extremely challenging game. After the tense battle, he commented, “They came back to tie the score, but it was our destiny.

“Everything I ever hoped for has come true. I am at a loss for words. The penalty shootout went as planned, and I remained composed throughout,” he continued.

Messi also won the Golden Ball trophy for the best player in the competition thanks to his incredible World Cup run.

Argentine midfielder Enzo Fernandez was named the best young player, and Martinez was awarded the Golden Glove as the best goalkeeper.

Due to his eight goals during the competition, Mbappe was awarded the Golden Boot.