As families flood in from remote communities, a crisis looms in Hiran’s IDP camps. 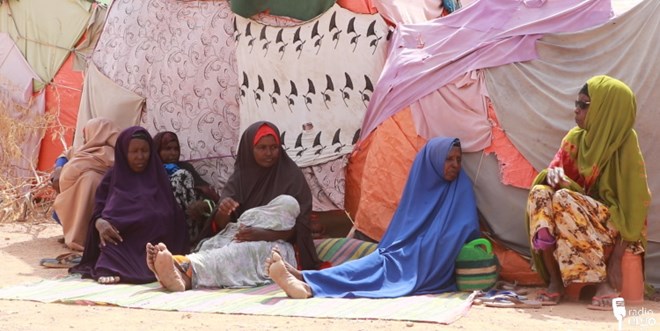 Ayan Hassan Abdi and her young children traveled six days from their rural hamlet in southern Somalia’s Bakool area, leaving their husband behind, to reach an IDP camp in Beletweyne where they hoped to get relief.

Because there is no transportation around the communities that are ringed by Al-Shabaab, they walked for the first two days. When they arrived at a location with transportation, they boarded a bus that took them for four days due to the poor condition of the roads and the roundabout path that the drivers must follow to escape roadblocks.

On April 23, the family was dropped off at the Nasteho camp west of Beletweyne.

“Our situation is untenable…

I have seven children and they are all too young to work. I have no food. We get assistance from the equally burdened IDPs. We get lunch or supper, one meal a day,” Ayan told Radio Ergo.

Lack of food, poor hygiene and lack of toilets are among the challenges facing those living in Nasteho camp. Women fear going to the toilet in the bush for fear of attack. However, the camp seemed a better bet than staying in the village where there is nothing at all.

“We had 60 goats and five cows, some died because of the drought and we sold a few of them. We didn’t get any rain for three years in a row. The only well we were surviving on for water broke down and you know you can’t stay where there is no water,” Ayan said.

She erected a small makeshift at the entrance of the camp. The camp has no well and also no school. Only a few have the privilege to send their children to private schools and buy a barrel of water costing two dollars. Ayan mostly begs water from her neighbours.

Nasteho camp chairwoman, Fatumo Mohamed Abdullahi, said people are arriving every day from the rural areas and they are overwhelmed by the worsening conditions in the camp.

“The camp is full, over 200 people arrived recently. A well-wisher donated us some space behind this camp. We help the new arrivals to find a spot to put up temporary houses and to get some food so they can start a new life in the camp. A group of good people help me do this,” she said.

Osman Dahir Jamal has been in Nasteho for just a week. He put up two sticks covered with a cloth for his family to shelter under.

“When it rained last night, my children and I stayed up the whole night. The cold was too much and we didn’t have thick clothes to put on. Some of my children have fallen sick and I wasn’t able to get them any medical care, I have no money to take them to private hospitals,” Osman told Radio Ergo.

Osman was a farmer in Qallaafe, in Ethiopia’s Somali region, where he also kept some animals. After three failed rains he quit farming due to the shortage of water from the Shabelle river and inflation of the price of fuel needed for generators to pump water.

His last crops of tomatoes and onions died due to lack of water and he was left with debts of $309 for buying seeds and fertiliser. He also lost his 30 goats.

The governor of Beletweyne district, Osman Dhisow Dhubow, said they have not been able to provide any assistance to the growing number of IDPs in various camps in Beletweyne, but they are carrying out assessments to determine their conditions and needs.

He requested aid agencies and the Somali federal government to bring aid to the camps urgently for those who have migrated from Bay and Bakool regions, other parts of Hiran, and Ethiopia.