At the 2022 Academy Awards, actor Will Smith strikes comedian Chris Rock in the face. 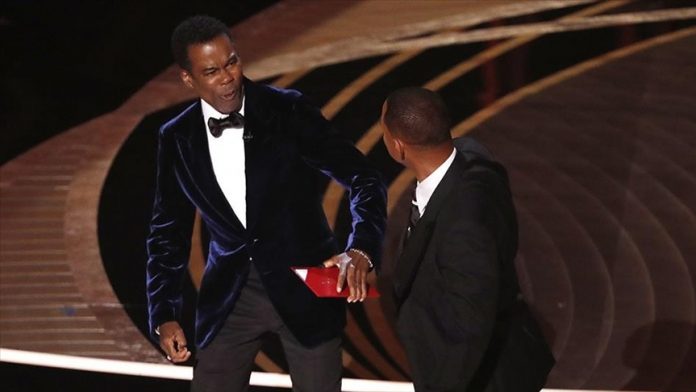 At the 2022 Academy Awards, the glamour and glamor of Hollywood turned violent when actor Will Smith struck comedian Chris Rock in the face, forcing a tape delay in the ABC television network’s coverage of the Oscars.

While introducing the Best Documentary nominations, Rock made a joke about Smith’s wife, Jada Pinkett Smith.

“I adore you, Jada.” “I can’t wait to see G.I. Jane 2.” Rock appeared to be joking about Pinkett Smith’s short hairdo in comparison to Demi Moore’s US Navy Seals military haircut in G.I. Jane.

An awkward tape delay cut to Smith saying something to Rock with faint audio of the encounter, interrupting the show.

Smith walked up on stage and slapped Rock across the face with an open palm before strolling back to his seat, according to online video of the unedited portion of the broadcast.

“Wow,” Rock exclaimed immediately after the collision. Oh my goodness.”

“Keep my wife’s name out of your f-ing mouth!” Smith yelled at Rock as the cameras returned to Smith.

Smith went on to win an Academy Award for Best Actor for his role as the caring father of tennis stars Venus and Serena Williams in the film King Richard.

In his victory speech, he made a veiled reference to the issue, referring to his involvement in the film.

“Richard Williams was a staunch advocate for his family,” Smith said. “Life imitates art.” They thought I looked like the insane father…

“Denzel remarked to me a few minutes ago,” Smith continued, referring to his conversation with fellow Best Actor contender Denzel Washington, “that’s when the devil comes for you.”

Smith did not mention Rock by name during his remarks, but he did apologize to the Academy in general.