At the U.S.-Africa Leaders Summit, the president of Somalia meets the secretary of state of the United States. 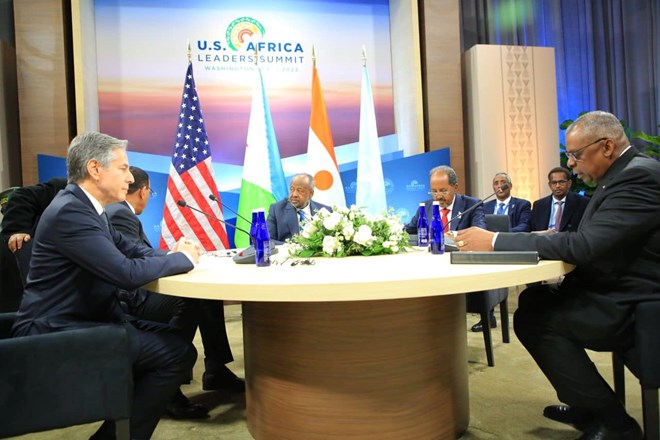 The U.S. Secretary of State Antony Blinken and the Secretary of Defense Lloyd Austin met with the president of Somalia, Hassan Sheikh Mohamud, on the sidelines of the U.S.-Africa Leaders Summit in Washington, which was hosted by Vice President Biden.

The discussion on regional stability and coordination of humanitarian relief took place on Tuesday and was also attended by the presidents of Djibouti and Niger, Ismail Omar Guelleh and Mohamed Bazoum.

The leaders praised the substantial accomplishments of Somali troops in the liberation of the Middle Shabelle and Hiraan regions while highlighting the negative effects of terrorism on the stability and prosperity of the continent.

President Mohamud spoke about the harsh effects of the drought on the lives of the Somali people and how climate change plays a significant role in this. The Somali government prioritizes environmental protection and climate change adaptation in its joint plans based on climate cooperation, which he welcomed.

More than 8 million people are severely food insecure, according to a new assessment from the UN and other experts, as Somalia faces “an unparalleled level of need” due to five consecutive failed rainy seasons and “exceptionally high” food costs. There have been many fatalities.

According to a recent food security assessment on the worst drought in decades in the Horn of Africa, while Somalia has not yet experienced famine, numerous regions of the country face the possibility of it in the coming months.

The leaders praised the Somali government’s efforts in pursuing its development agenda and taking proactive measures based on friendly relations with neighbors, collaboration, and economic, security, and political integration.

In her opening remarks at the U.S.-Africa Leaders Summit on Tuesday in Washington, Vice President Kamala Harris emphasized the continent’s youthful population, arguing that the continent’s demographics will surely cause it to become a significant global player in the decades to come.

The President’s Advisory Council on African Diaspora Engagement was established by an executive order signed by President Joe Biden, who will meet with leaders on Wednesday. Nearly 2 million African immigrants reside in other countries, and there are other African Americans who are sprung from slaves and have strong ties to Africa.