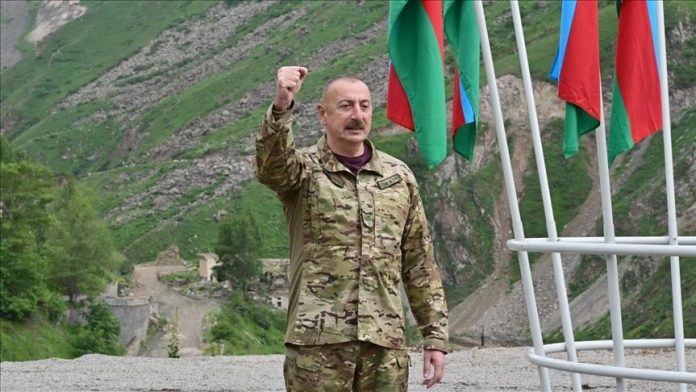 The Azerbaijani army has been deployed to the strategic city of Lachin in Karabakh, according to President Ilham Aliyev.

“Today, on August 26th, we – the Azerbaijanis – returned to the city of Lachin,” Aliyev tweeted.

“The Azerbaijani Army is presently stationed at Lachin. The villages of Zabukh and Sus were taken over “He continued.

On this occasion, Aliyev also complimented all Lachin residents and the people of Azerbaijan.

A video on social media showed Azerbaijan’s flag being raised atop a building in Lachin’s city centre.

Maj. Gen. Kanan Seyidov, the commander of the army corps, stated, accompanied by a number of soldiers, that the Azerbaijani army has taken full control of the city of Lachin, as well as the villages of Zabukh and Sus, in accordance with the president’s directions.

Lachin is located on the road connecting the city of Khankendi in Karabakh with Armenia.

Russian peacekeepers and the Armenian population have departed the areas in the Lachin Corridor, which includes Lachin, Zabuh, and Sus. The area was temporarily placed under Russian authority in accordance with a tripartite statement made on November 10, 2020, by Moscow, Baku, and Yerevan, following 44 days of the second Karabakh War between Azerbaijan and Armenia.

Azerbaijan built a 32-kilometer (20-mile) road around Lachin as part of the declaration for the Armenian community in Karabakh to use on their trip to and from Armenia.

Russian peacekeepers stationed along the old Lachin Corridor route were obliged to relocate checkpoints to the new road.

The Armenian army conquered Lachin and its villages in 1992, and Armenians imported from Syria and Lebanon settled there in the years that followed.

Azerbaijan has repeatedly said that it considers this to be a war crime and a violation of the Geneva Conventions.