Biden completes new drone strike regulations for the US 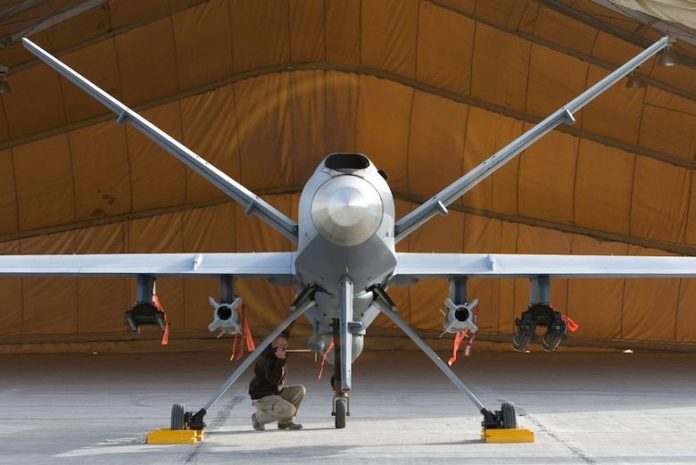 US officials announced on Friday that President Joe Biden has signed a long-awaited classified policy tightening the guidelines for the CIA and the Pentagon to conduct lethal drone strikes and commando raids outside of conventional war zones.

The US still conducts counterterrorism strikes from a distance in countries like Somalia, Yemen, and now Afghanistan, but only Iraq and Syria are still regarded by the US as “areas of active hostilities” or conventional war zones.

In actuality, the new policy indicates that the US is reducing its reliance on drone strikes, a tactic that was once widely used to combat terrorism but has come under increased scrutiny in recent years as a result of a number of high-profile revelations about the deaths of civilians.

According to a senior administration official, the new policy names the person who must approve a lethal drone strike or commando raid before it can be launched on a specific counterterrorism target, though it does allow the president to waive that requirement and others at his discretion. The president must also approve the list of organisations in each nation whose members are thought to be potential targets.

The new regulations were first covered by the New York Times.

Additionally, it institutionalises a set of requirements for taking action against a target, including the requirement that counterterrorism operators prove with “near certainty” that no civilians will be killed during the attack and that the target still poses a serious threat to the United States.

According to the senior administration official, the policy also stipulates that operators must receive approval from the head of mission for the State Department in the relevant nation.

The guidance “directs [the Biden] Administration to be discerning and agile in protecting Americans against evolving global terrorist challenges,” according to White House Homeland Security adviser Liz Sherwood-Randall, who led the nearly two-year review that produced the new policy. It also “requires that U.S. counterterrorism operations meet the highest standards of precision and rigour, including for identifying appropriate targets and minimising civilian casualties.”

Commanders on the ground will continue to have more autonomy over operational choices in Syria and Iraq, where the US has a military presence.

Many of the restrictions that the new policy now formallyizes were already in place when Biden assumed office. The policy now reverts a loosening of Obama-era regulations under then-President Donald Trump, which had pushed the chain of command’s authority for approving lethal strikes lower.

The senior administration official told CNN, “I think this is overwhelmingly a return to a rigorous process, to an intel-heavy consideration of targets and [an] intense role for the president himself in approving the use of this particular tool.

According to sources familiar with the discussions surrounding the new regulations, some counterterrorism operators and analysts have probably grumbled at the tightened restrictions. However, these people claimed that the changes are somewhat inevitable due to the wider shift in US priorities away from counterterrorism and toward competition with China and Russia, as well as the increased political scrutiny on civilian casualties.

The new approach comes in response to a different Pentagon initiative unveiled in August with the aim of lowering the number of civilians killed and hurt as a result of US military operations, particularly drone strikes.

Since the military launched a botched strike in August of last year while chaotically withdrawing from Afghanistan, which resulted in the deaths of 10 civilians, including seven children, the US military has come under fire for killing civilians in drone strikes.

The department also came under fire for an airstrike in Syria in 2019 that claimed the lives of numerous civilians. In November 2021, following The New York Times’ publication of those fatalities, the military officially acknowledged them. In the end, the department found no one responsible for the 2019 strike.

Building a framework to embed individuals trained to take into account civilian harm issues across the military, both in combatant commands and at higher levels of the Defense Department, is the task assigned to the Pentagon action plan.

In many of the nations affected by the new policy, US military drone strikes have sharply decreased in recent years. The Foundation for the Defense of Democracies’ data shows that since 2018 and 2019, respectively, there haven’t been any US drone attacks in Yemen or Pakistan. Since Biden took office, US drone attacks in Somalia have sharply decreased.

It is much more challenging to assess how the CIA’s operations have changed over time because, unlike the military, the CIA is not required by Congress to disclose information about its counterterrorism strikes, including civilian casualties.

Some former intelligence officials go further, asserting that CIA drone strikes kill significantly fewer civilians than military ones. However, since the agency’s statistics are confidential and outside organisations that monitor drone strike casualties claim the US military routinely undercounts its collateral deaths, it is challenging to make an accurate comparison.