Boris Johnson resigns after party revolt, will stay on till new leader chosen 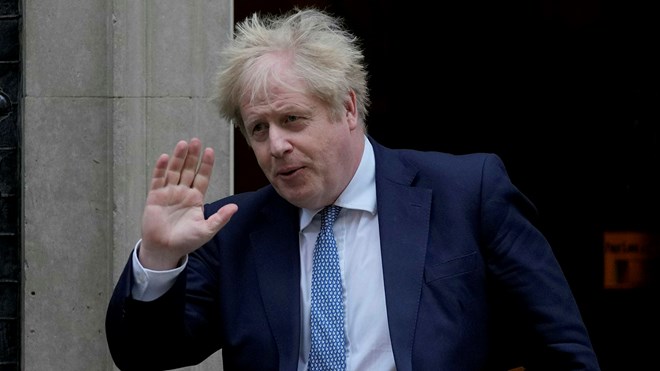 LONDON — Boris Johnson stepped down as leader of the Conservative Party on Thursday but will continue to serve as prime minister until his successor is chosen, following an avalanche of resignations within his cabinet that eroded his authority and paralyzed the British government.

Speaking to a crowd of supporters and onlookers at the lectern outside 10 Downing Street, Johnson said, “It is clearly now the will of the parliamentary Conservative Party that there should be a new leader of that party and therefore a new prime minister.”

“I’ve appointed a cabinet to serve, as I will, until a new leader is in place,” he said. That process could take at least six weeks or longer. The timetable will be announced next week.

Johnson did not become emotional, nor did he apologize for the behavior and actions that brought the 58-year-old politician to this low point.

Instead, he blamed his party for his downfall, comparing his fellow lawmakers to stampeding animals.

“As we have seen at Westminster … when the herd moves, it moves. And my friends, in politics, no one is remotely indispensable,” Johnson said.

He paid tribute to his wife, Carrie, who was watching his speech with their young daughter in her arms.

“I know there are many people who are relieved, and perhaps quite a few who will also be disappointed. I want you to know how sad I am to be giving up the best job in the world. But them’s the breaks,” Johnson said.

Earlier on Thursday, Johnson agreed to resign as leader of the Conservative Party but could remain in office until it can pick a new prime minister. There would be no general election.

There was immediate and fierce pushback to that idea from some lawmakers and party grandees who warned that Johnson was soiling the Conservative Party brand and that he was too damaged to stay in office through the summer.

Johnson’s former top aide and now chief critic, who helped his boss win the Brexit referendum and get elected, warned that the prime minister needed to go now. In a tweet, he urged the Conservative Party to “Evict TODAY or he’ll cause CARNAGE.”

Dominic Cummings said Johnson even now is “playing for time” and will try to stay on if he’s allowed to remain in office until the fall. “He doesn’t think it’s over,” he said, speculating that Johnson is plotting and thinking, “ ‘I can still get out of this, I got a mandate, members love me, get to September.’ ”

As the world watched the British government unravel, the defense secretary, Ben Wallace, stepped forward to assure Britons that they were being protected. Wallace tweeted: “A number National Security Ministers are directly involved in authorising, on a daily basis, operations to defend the UK & its citizens.”

Wallace added that “a number of us have an obligation to keep this country safe, no matter who is PM.”

Keir Starmer, leader of the opposition Labour Party, told the BBC that Johnson “needs to go completely, none of this nonsense about clinging on.”

By midday, Johnson was appointing new members to his Cabinet to replace those who had resigned. He is doing this to keep government functioning — but also perhaps to bolster his own position.

Johnson is not the first Conservative leader to have been shoved aside by his party, which is famous for ditching its leaders quickly when they are no longer assets. Even Winston Churchill resigned — after being given a gentle push — as his health declined in his later years.

Johnson’s predecessor, Theresa May, was forced out after she was unable to get her Brexit deal through Parliament following opposition within her party, including from Johnson. May managed just over three years in office — Johnson has ruled for just under three years.

Johnson woke up Thursday morning in Downing Street, his office and residence, to another wave of resignations by government officials and party members declaring that the embattled prime minister must step down immediately — for the sake not only of his Conservative Party but for the country.

Before the breakfast shows on television were over, there were 53 resignations, including four Cabinet ministers in just two days. Many of the letters included brutal assessments of Johnson’s tenure and critiques of his honesty. Some pleaded with him to go.

Nadhim Zahawi, who on Tuesday was appointed chancellor, the second-most important job in government, turned on Johnson on Thursday and told him to step down. He tweeted: “Prime Minister: this is not sustainable and it will only get worse: for you, for the Conservative Party and most importantly of all the country. You must do the right thing and go now.”

Johnson had until now refused to bow to pressure to resign, saying that he has a 14-million-vote mandate from the British people who cast their ballots for him and his party in the last general election, in 2019.

But his authority has evaporated over the past 48 hours, with longtime colleagues and allies telling him to go — resignations seemed to be landing every few minutes.

There were so many that it became unclear whether Johnson and his aides could fill the spots quickly enough to keep the government going. Ministers in charge of security, the courts, technology, education, finance, Northern Ireland and science have all left their jobs.

Northern Ireland Secretary Brandon Lewis was among those who resigned from his position in the Cabinet on Thursday morning. He said that the British government requires “honesty, integrity and mutual respect” and that it is “now past the point of no return.”

Damian Hinds, the departing security minister, told Johnson that “it shouldn’t take the resignation of dozens of colleagues, but for our country, and trust in our democracy, we must have a change of leadership.”

Some began to make comparisons to former U.S. president Donald Trump’s attempt to cling to power. Bernard Jenkin, a Conservative lawmaker and chair of the powerful Liaison Committee, told the national broadcaster that Johnson “can go with some dignity” or he can be “forced out like Donald Trump, clinging to power and pretending he’s won the election when he’s lost.”

Up until Thursday, Johnson had shrugged off calls for him to go. At a fiery session of the weekly Prime Minister’s Questions, he said: “Frankly, the job of a prime minister in difficult circumstances when you have been handed a colossal mandate is to keep going, and that’s what I’m going to do.”

The race to succeed Johnson started Thursday, with Conservative Party members throwing their names into the hat — even before he had made a statement to the nation about his future. On Thursday morning, Suella Braverman, who serves in Johnson’s cabinet as the attorney general, said she would be running in the contest.

The process of picking the new leader can take several weeks. In Johnson’s case, he became prime minister in 2019 about two months after his predecessor resigned.

Any member of Parliament for the Conservative party can put themselves forward for the role — provided they receive nominations from at least two colleagues. The party holds several rounds of secret-ballot votes to whittle down the field, eliminating the person with the fewest votes each time. The final two candidates are then put before the grass-roots members of the party, a group of about 200,000. They then select the winner.

Uganda steps up fight against Zoonoses