Brisbane’s ‘enthusiastic about soccer’ community comes together for the Ramadan Cup competition. 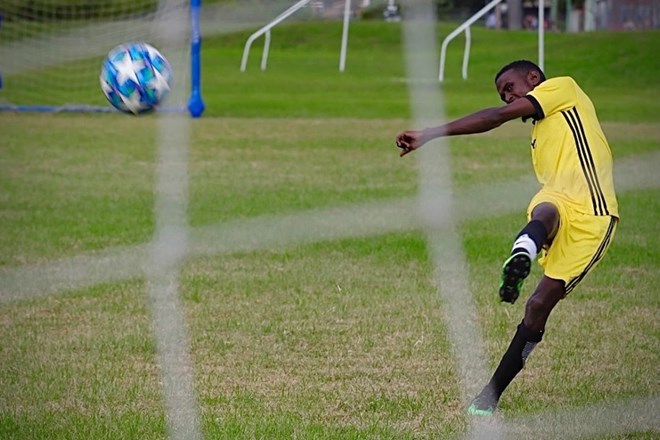 A popular statement among spectators during yesterday’s Ramadan Cup final was that “every Somali was born with a soccer ball in their hands.”

The competition came to a close yesterday with Brisbane United narrowly defeating Future Stars United in a thrilling final.

But the Ramadan Cup, which is now in its tenth year, is no ordinary soccer tournament: throughout Ramadan, Muslims around the world fast from sunrise to sunset, allowing no food or water to pass their lips as a form of worship.

The Ramadan Cup is played on a short pitch with only seven players per side for 60 minutes, rather than the typical 90 minutes, to ensure that participants have adequate energy.

And the goal was not so much to win as it was to connect with one another and their faith.

The Somali Community Association of Queensland (SCAQ) started the competition in 2013.

SCAQ president Faysel Ahmed Selat said at the time, many young Somalians had recently arrived in Australia through third nations, after fleeing civil war in their own country.

“As a community, given we grew up in different countries … it’s very important that we stay together,” he said.

SCAQ used sports to bring the community together and to keep young, at-risk males from going down dangerous paths.

“Young Somalis are passionate about soccer, and we as a community know that they love soccer — so we use soccer as a means to engage with them,” Mr Selat explained.

“Coming together, having this competition, helps them… increase their confidence and skill, boost their self-esteem, networks, friendships, and see other people who look like them succeeding in Australia.”

“To be honest, Ramadan Cup helps a lot of folks who might otherwise be taking drugs and drinking.”

Mr Selat, who is now assisted by the Australian Federal Police’s community liaison division, said the yearly competition drew audiences of up to 300

There is no sledging from the sideline here — spectators and players alike are on their best behaviour, because they are observing Ramadan.

“It is a month of kindness, generosity, respect and reflection — it’s important that we look after people living around us, like, regardless of religion,” Mr Selat said.

Playing in the tournament brings Brisbane United striker Zaki Ahmed the strength to sail through the month of fasting.

“It’s good to be around your own people, people who are fasting as well,” he said.

“There’s no swearing here, there’s no fighting, there’s no toxic behaviours or things that you’re distracted [by ]… it’s a good way of having that positive people around you and making sure that you’ve got clean thoughts,” Mr Ahmed said.

Future Stars United centre back and coach Mahad Mowlid Mussa said hunger and thirst had not put him off his game.

“Your body gets used to it, so it’s basically normal — normally we play better on Ramadan when we’re fasting … because you’re empty, you feel completely light,” he said.

He said the best part of the tournament was seeing old friends who share a common background with him.

“It keeps it keeps them away from a lot of trouble — they learn from the older ones, come together talk to each other.

“It’s not only football, it’s gathering together.”

Detective Johnson said they hoped their involvement helped build a sense of belonging in Australia.

“Police — we traditionally approach work activities and investigations with a traditional police mindset but that’s dating back many decades and what Australia used to look like is very different today — and we need to approach things today differently to get a better outcome,” he said.

“There’s lots of myths and hurdles to dispel between diverse communities and policing in general.”