CAIR demands that the FBI investigate the death of a man found in a burned automobile as a hate crime. 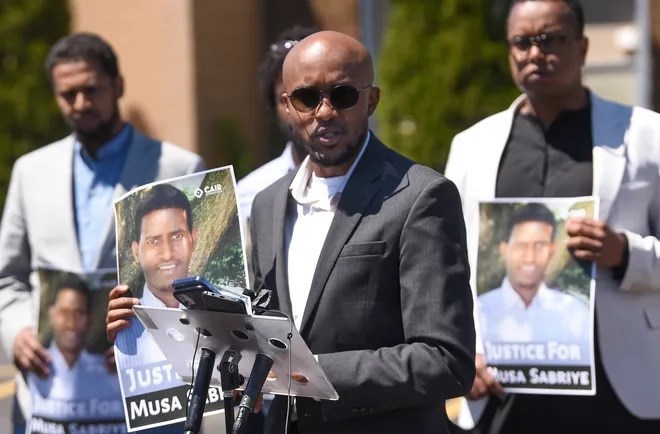 The Council on American-Islamic Relations’ Minnesota chapter is calling for an open inquiry into the death of a man discovered Monday in a charred automobile in Waite Park.

On Friday, the organization conducted a press conference in St. Cloud with Musa Sabriye’s family.

Chief David Bentrud of the Waite Park Police Department verified to the Times that Sabriye, 33, was the person found dead on Monday. Sabriye was in the front passenger seat of the burning vehicle, according to Bentrud, and the inquiry is still ongoing.

Around 12:52 a.m. Monday, Waite Park police and fire crews were dispatched to a car fire in the 1500 block of Stearns County Road 6 in Waite Park, where they discovered a vehicle engulfed in flames.

The family said it took days to confirm the identity of the remains with DNA, according to CAIR.

At the news conference, Mohammed Ibrahim, director of CAIR-Minnesota, asked for assistance from the FBI in calling the incident a hate crime. “We do know that hate crime is up in the state of Minnesota,” Ibrahim said, also citing the defacing of a Muslim cemetery in Farmington in October.

Some of the speakers at the news conference said the incident was similar to one in 2014 where Ahmed Farah was found dead in a car engulfed in flames in Owatonna. News reports from the time said that incident was believed by authorities to be a suicide.

Ibrahim and others at the news conference said they werem uncomfortable with how long it took to identify the body.

Bashir Omer, who spoke at the press conference, cited a lack of Somali members of the police department despite the large presence of East-Africans in Central Minnesota.

According to his family, Sabriye was taking classes to earn his GED and worked full time at Fulfillment Distribution Center in St. Cloud. They said he was last seen Sunday.

Bentrud said the Waite Park Police Department is working with the Minnesota Bureau of Criminal Apprehension, State Fire Marshal and the Midwest Medical Examiner’s Office to learn what happened to Sabriye.

“We will continue to keep his family informed as our investigation progresses,” Bentrud said. “In keeping with Minnesota law, we will release all public information from our investigation once the investigation is closed. In the meantime, we appreciate the public’s patience as the investigation continues.”
Community members speak at a press conference urging more transparency from law enforcement following the recent death of Musa Sabriye in Waite Park Friday, June 3, 2022, at the Islamic Center of St. Cloud. Photo: Zach Dwyer/ St Cloud Times