Colombia will elect a president after a contentious campaign. 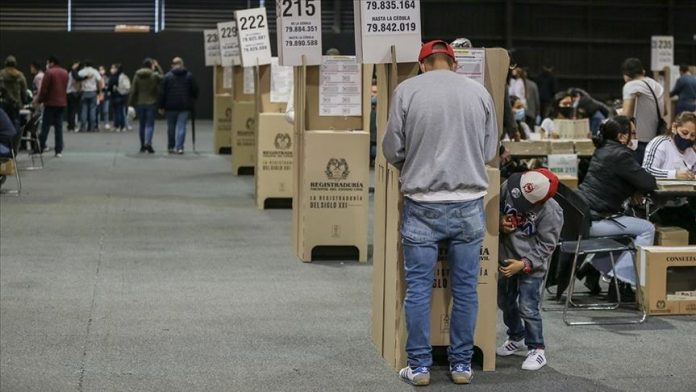 Colombians will vote on Sunday, following a tumultuous presidential campaign that saw voters split between those seeking change and those favoring peace and order.

Petro, 62, belonged to the M-19 guerrilla group, which disbanded in the early 1990s. He went on to become a senator and the mayor of Bogota, Colombia’s capital. He has committed to restructure the pension system and eliminate oil extraction in his third presidential bid.

Many voters are hoping that Petro and Francia Marquez, the first black female vice president, would be elected.

“For years we have been governed by a corrupt right-wing,” said indigenous leader Luis Pushaina, who works as a tourist guide in Bogota’s historic Plaza Bolivar. “We need someone to care for the underprivileged. We need a change,” he told Anadolu Agenncy.

Petro is likely to face a run-off against right-wing Gutierrez, the former mayor of Medellin, who is seen as representing the traditional political class with campaign promises not far removed from the current government’s policies that have failed to address widespread poverty and inequality.

“This election is about change or continuity,” Sergio Guzman, director of Bogota-based Colombia Risk Analysis, told Anadolu Agency. “It has been the dominant narrative during the whole campaign due to the people’s growing discontent.”

Increasing fatigue among Colombians fed up with soaring inflation, poverty, unemployment, violence and the inability of the government to tackle inequality have led to a demand for political renovation.

“The disillusionment left by President (Ivan) Duque’s government is what has made Petro’s arrival to power possible,” said Guzman. “People want decisive actions from their government.”

So much so, that although the country fears the left for having a history of violence with guerrilla groups and a neighboring Venezuela that is in deep crisis since the left came to power, there is a strong chance that Petro will come to power.

“The campaign that Petro’s opponents have made trying to make people feel fear or reject certain ideas is not succeeding because the current situation is not a balm,” said Guzman.

Trailing Gutierrez is right-wing populist Rodolfo Hernandez, who has drawn comparisons with former US President Donald Trump. The businessman and former mayor of Bucaramanga has managed to position himself well in the polls in recent weeks due to his anti-corruption speech and popularity on social media.

The fourth candidate is Sergio Fajardo, a centrist former Medellin mayor, who has lost momentum in recent weeks.

Seven candidates are vying to lead the country but if no one receives more than 50% of the vote, the top two will compete in a run-off June 29.