Death toll from floods in Pakistan rises to over 1,480 as 54 more die 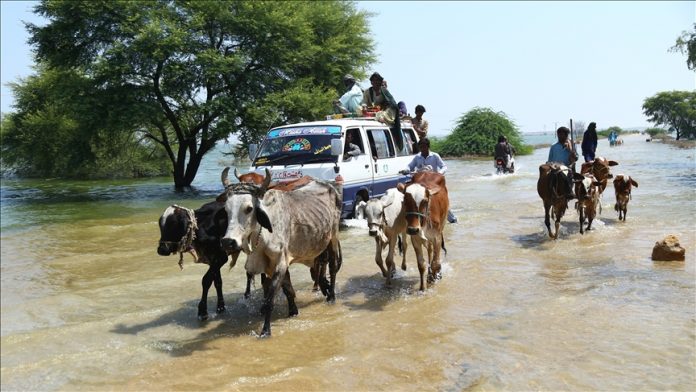 The number of people killed by the terrible floods that swept through Pakistan increased to 1,481, with 54 new fatalities in the past 24 hours, including 18 children.

According to the country’s National Disaster Management Authority (NDMA), of the new fatalities, 44 were reported from the southern Sindh province, while eight individuals died in flood-related accidents in southwestern Balochistan and two in Azad Jammu and Kashmir.

According to the NDMA, a total of 638 persons have passed away in Sindh since June 14 followed by 303 in Khyber Pakhtunkhwa and 278 in Balochistan.

12,748 persons have been hurt nationwide as a result of rain and flood-related accidents since June 14.

Like other nations in the area, Pakistan experiences strong rainfall throughout the monsoon season, but this year has been the wettest since 1961.

One-third of the nation is currently under water as a result of the country’s main river, the Indus, overflowing due to the heavy rains and melting glaciers, which have flooded enormous tracts of fields and plains.

estructive rains and floods have also destroyed 3,90 bridges, buildings, and 12,418 kilometers (7,716 miles) of roads in the South Asian nuclear nation, which is already experiencing political and economic unrest.

The torrential floods have affected more than 33 million of the nation’s roughly 220 million residents, resulting in a stunning loss of almost $30 billion in damages to an already frail infrastructure.

Health experts have warned that infections such as diarrhea, gastrointestinal problems, typhoid, malaria, dengue, and other illnesses will kill more people than rains and floods because there are hundreds of thousands of displaced people who are also dealing with outbreaks of waterborne, skin, and eye diseases.