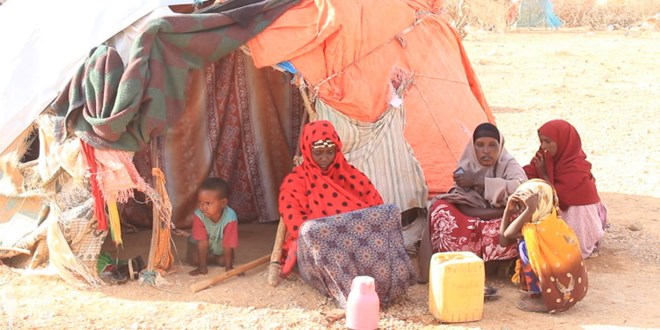 Nasra Adan Hussein, a crippled woman who recently moved to Salama camp on the outskirts of Abudwaq in Central Somalia’s Galmudug district, has nothing to feed her children other than what she may beg from her neighbors.

“I don’t have anything to eat.” We rely on whatever is cooking in the neighborhood. She told Radio Ergo, “I frequently take my children to them and ask them to feed them for me.”

Nasra is one of 180 impoverished families that have arrived in the Salama IDP camp in the last three months.

The drought killed all of her 130 goats and two camels earlier this year. She relocated from the countryside in order to save her children, who are in terrible health.

She goes around the camp every morning begging for dry or cooked food and sometimes comes back to their hut with nothing. She lost the use of her right arm which was burnt when she was a child.

“I am a disabled mother whose children are looking up to her. When we were back in our rural homes we had animals, but now we have nothing. My children have no education, health care or shelter. I sometimes ask myself what I will do with these children, again I tell myself it’s Allah who brought them into this world,” she said.

Nasra owes $300 to a hospital where she took her children several times for treatment and is worried that she cannot pay the bills.

Another displaced woman in the camp, Fatumo Garad Ali, arrived in January with her two disabled daughters from Isgoys in Ethiopia’s Somali Region. Both girls have been paralysed in their legs from birth.

“My two sick daughters survive on two cups of tea a day. That’s all I can get for them because they can’t feed on the normal food that’s available in the camp,” Fatumo said.

The camp committee chairman, Idris Adan Abdulle, said they had called on the Abudwaq district leaders as well as the Galmudug regional government several times to come to the aid of the IDPs in Salama.

He added that there had also been requests made to NGOs but none had so far responded, leaving the newcomers from Galmudug and Ethiopia to depend on the goodwill of the equally struggling 750 families already living in the camp.