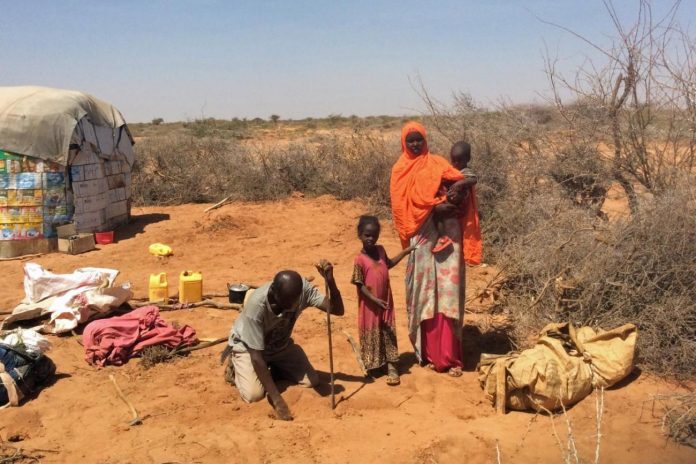 Millions of people in the Horn of Africa are facing severe hunger as a result of the region’s worst drought in 40 years.

Aid agencies fear that, as the situation worsens, a focus on the Ukraine crisis will overwhelm the agenda and donors at a critical time for Somalia, in particular, in East Africa.

Currently, one out of every four Somalis is hungry due to severe drought, and the United Nations (UN) estimates that 4.6 million Somalis will go hungry by May 2022.

People are flocking to camps for internally displaced persons in Somalia’s southern regions (IDPs). The area is littered with dead goats, camels, sheep, cows, and donkeys, all of which died as a result of a lack of water.

The situation in the camps is dire. There isn’t enough food, and water trucks are only bringing in small amounts of water. Malnutrition affects a large number of children.

“Five years ago, there was enough aid from the international community,” says Mohamud Ahmed, a Somalian aid worker with Save the Children. “The response was adequate.” This time, however, that vigilance is missing. There is a significant disparity between the amount we require and the amount raised thus far.”

Only 3.2 percent ($47.1 million) of the required funding ($1.5 billion) for the UN Office for the Coordination of Humanitarian Affairs’ humanitarian response plan has been received so far, according to the UN.

If the funding shortfall persists, the UN’s World Food Programme will have to prioritize funds, according to WFP spokesman Petroc Wilton. “It’s incredibly difficult because you have to choose which areas and populations need help the most,” Wilton said.
According to him, the organization has already been forced to shift funds from its preventive programs in Somalia to curative aid.

Wilton continues, “The situation is extremely dire.” “In the camps, we’re already seeing the consequences of the funding gap. We simply cannot assist everyone who requires assistance. Unless we can find a way to close that funding gap, things are only going to get worse.”
The war in Ukraine continues after a devastating locust invasion, the negative economic effects of the COVID-19 pandemic, and the ongoing drought.