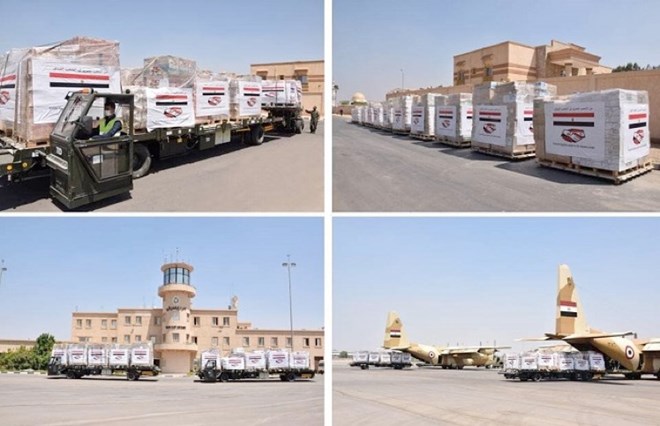 Somali Magazine -On Sunday, two military aircraft carrying medical personnel and supplies for those affected by the drought landed in Mogadishu.

According to Somalia’s state-run media, the medical team would fly Somali National Army soldiers who had been hurt during the ongoing military offensive operations against al Shabaab to Egypt for medical care.

The Supreme Commander of the Armed Forces, President Abdel-Fattah El-Sisi, gave the order for humanitarian aid to be delivered to Somalia.

In an effort to drive out the militant group al Shabab, government forces have been conducting operations against al Shabab in the Hiiraan, Galgadud, and Bay regions.

In the last two months, operations in Hiiraan and Galgadud resulted in the deaths of over a hundred militants, as well as casualties for the joint forces. The military officials did, however, list the casualties on their side.

A devastating drought and four failed rainy seasons have left parts of Somalia on the verge of famine, the UN humanitarian chief warned earlier this month.

The former minister claimed in an interview with BS TV that Villa Somalia had requested Egypt to refuse its C-130 flight to Somalia carrying medical supplies from the Arab League.

The administration of President Mohamed Abdullahi Farmajo, however, made no comments on it.