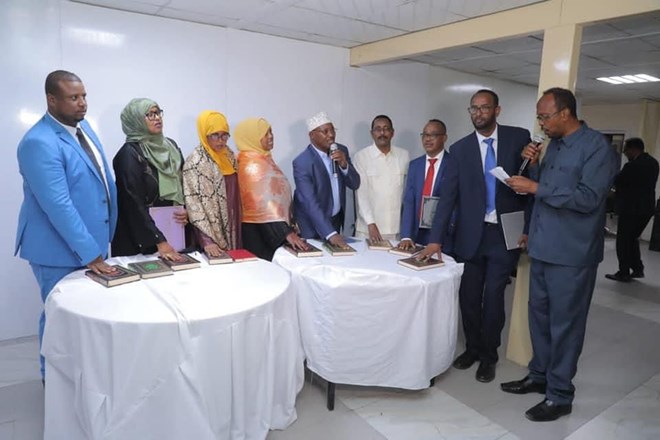 Mogadishu, Somalia – On Monday, the 16 Elwak district lawmakers were sworn in in Mogadishu.

The members were meant to be sworn in at the Afasiyoni tent, according to Somalia’s interim parliamentary speaker Abdisalam Dhabanad. Despite this, the event was moved to a hotel within the airport after federal government agents intervened.

Interim Speaker of the House of the People Amb. Abdisalan Ahmed Dhabanad, Lower House General-Secretary Abdikarim Abdi Buux, and members of the Federal Electoral Implementation Team were present at the swearing-in ceremony.

On Saturday, a separate parliamentary election for the Gedo constituency began in the regional capital Garbaharey. Members of the FIET who run that election is expected to conclude before the election for the Lower House Speaker.

Dhabanad told the media that the Elwak election was the only legal poll in the Gedo region and that only those winners would be certified by the federal election commission.

“The lawmakers sworn in today have the same FEIT certification that I received when I was sworn in. The certificates must have the signature of the FIET Chairman, Muse Guelleh Yusuf, to be valid.”

However, the Dispute Resolution Committee chairman, Mohamed Awil Warsame, has dismissed the parallel elections in Elwak and Garbaharey in the Gedo region as illegal. Speaking to the local media, the chairman said that the separate elections in Elwak and Garbaharey violated the September 17th agreement reached by the leaders of the National Consultative Forum.
Somalia’s President also called the two elections illegal and called for a national leadership conference to discuss the disputed seats.

The 16 seats from the Gedo constituency were the final seats left to complete the 11th Parliament.
With the Lower House complete, lawmakers in Mogadishu are preparing to elect the house speakers and then the president.