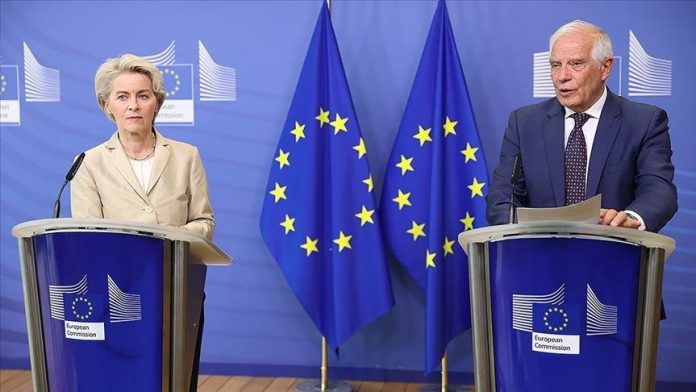 In response to Russia’s “escalation” in the ongoing war in Ukraine, the EU on Wednesday proposed a new set of “biting” sanctions against it, including a price cap on oil.

“Russia’s invasion of Ukraine reached a new level last week. The fake referendums, which were held in the areas that Russia had occupied, were an illegal attempt to seize land and redraw international borders “Ursula von der Leyen, president of the European Commission, stated at a news conference in Brussels. Josep Borrell, the head of EU foreign policy, was with her.

She added that “we are determined to make Kremlin pay for this new escalation,” calling the partial mobilisation and Vladimir Putin’s threat to use nuclear weapons “further steps on the escalation path.”

According to von der Leyen, the eighth package of sanctions includes a new list of people as well as additional trade restrictions, such as import bans on Russian goods with an annual value of €7 billion ($6.73 billion) and restrictions on the export of goods from the chemical and aviation industries.

She continued, “These new export restrictions will also weaken Russia’s economic foundation and its capacity to modernise.”

Additionally, the draught calls for more restrictions on the export of European services to Russia as well as a ban on EU citizens serving on the boards of Russian state-owned businesses.

The new package, according to her, also provides “the legal basis” for the G7-agreed cap on the price of Russian oil for third-world nations.

Even though the EU forbade the import of Russian crude oil by sea as of December 5, she claimed that some developing nations still required cheap Russian oil supplies. The president of the European Commission said, “This cap will help keep global energy markets stable and reduce Russia’s revenues.”

According to Borrell, the group will add new names to its list of specific sanctions, focusing on those who were in charge of organising referendums in the Ukrainian regions of Luhansk, Donetsk, Kherson, and Zaporizhzhia, as well as mobilising more than 300,000 citizens of Russia.

According to Borrell, the list will also include senior representatives of the Russian Defense Ministry as well as “proxy Russian authorities” in the four regions of Ukraine.

Additionally, “those who support the Russian Armed Forces by providing army equipment and weapons, including missiles and fighter aircraft, or participate in the recruitment of these 300,000 people” will be impacted, the official continued.

Since the start of Russia’s conflict with Ukraine in February, the EU has imposed sanctions against various Russian officials, including President Vladimir Putin and Foreign Minister Sergey Lavrov. These sanctions forbid the import of Russian gold, oil, and coal as well as the export of luxury goods and high-tech equipment. They also bar Russian and Belarusian banks from participating in the SWIFT global payment network.