Georgia is being urged to join international sanctions against Russia by Ukraine. 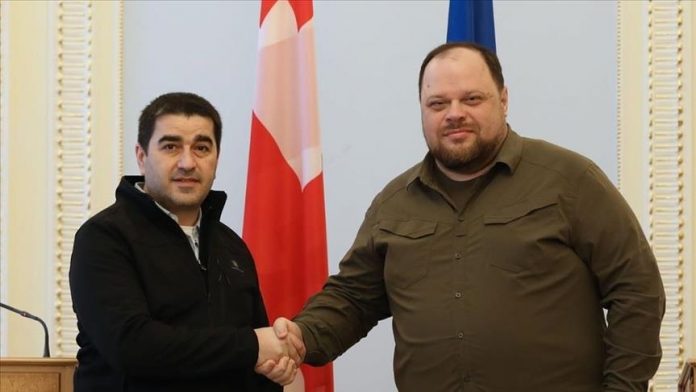 On Saturday, the speaker of Ukraine’s parliament urged Georgia’s government to join international sanctions against Russia.

“I thank the Georgian people for their support for Ukraine in the world arena and for their participation to the struggle against Russia,” Ruslan Stefanchuk and his Georgian counterpart Shalva Papuashvili said at a news conference in Kyiv, Ukraine’s capital.

Stefanchuk and Papuashvili had already visited the Russian-occupied cities of Bucha, Irpin, and Borodianka.

Ukraine, Moldova, and Georgia all have similar interests, and Stefanchuk stated that they will continue to work together to establish friendly ties.

The Georgian parliament speaker, for his part, stated that Tbilisi and Kyiv have close relations and that he visited the Ukrainian capital to express solidarity with the people.

“Russia must end this war and respect Ukraine’s territorial integrity in line with the agreed international borders,” said Papuashvili.

He also said it is not possible to express in words the painful scenes they saw in the cities they visited near Kyiv.

“Our cities and hopes were also bombed and destroyed. So we, Georgians, understand your pain very well,” Papuashvili said, referring to Russia’s attacks on Georgia’s regions in the past.

Russia’s war on Ukraine has drawn international condemnations, with the US, UK, and European Union, among others, imposing a host of sanctions on Moscow.

At least 1,982 civilians have been killed and 2,651 injured in Ukraine since the start of the war on Feb. 24, according to UN estimates, with the true figure believed to be much higher.

More than 4.8 million Ukrainians have fled to other countries, with over 7 million more internally displaced, said the UN refugee agency.