Halima Aden, a former model, smiled while taking a selfie with Meghan and Harry. 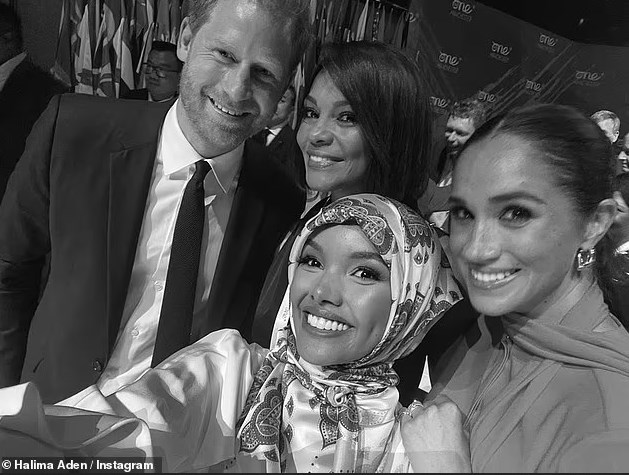 As they attended the One Young World Summit in Manchester this evening, Meghan Markle and Prince Harry posed for a selfie with the historically significant Muslim model Halima Aden.

Following Meghan’s address at Bridgewater Hall, the Duke, 37, and Duchess of Sussex, 41, who gave the event’s keynote address, were seen taking the picture with the 24-year-old.

Mother-of-two Before she raised her phone and took selfies with the Sussexes as they exited the stage, Ms. Aden, a One Young World counsellor who left the runway because it “compromised her religion,” was seen hugging Meghan.

The Somali counsellor, who was brought to the US as a child and was raised in a Kenyan refugee camp, was born. She was the first woman to compete in the Miss Minnesota pageant while sporting a hijab.

This evening, she posted the picture to Instagram with the caption, “This is what One Young World is all about!! supporting future world leaders as they set out on this mission to change the world! Additionally, meeting Meghan and Prince Harry was amazing. She is truly inspirational.

Meghan spoke this evening for the first time in the UK since Megxit, more than two years ago, and gushed about Prince Harry and how having her son Archie changed her life.

Ms. Aden was also the first model to ever appear in a Sports Illustrated issue wearing a burkini and a hijab.

The 24-year-old looked stunning in a flowy white blouse and wide-leg black trousers as she huddled for a photo with the eagerly anticipated keynote speaker. She has fronted campaigns for Rihanna and Kanye West’s clothing lines.

Ms. Aden was born in Somalia and spent her early years in the Kakuma Refugee Camp in Kenya before relocating to the US when she was seven.

She became the first supermodel to wear a hijab when she was 19 years old, catapulting her to international fame.

After claiming that the fashion industry treats models as though they are “disposable” and “replaceable,” the star revealed last year how she left the field to “give it a taste of its own medicine.”

She has graced the covers of British Vogue, Vogue Arabia, and Allure since her big break in 2017, but she has since decided to give it all up.

Ms. Aden discussed how models are treated in the fashion industry like they are “disposable” and “replaceable” in an interview with The Times.

So, she continued, “I wanted to give the fashion industry a taste of its own medicine.” Thank you for these incredible four years, but I’m going to move on with my life and replace [modelling] with something better, just like you churn through all these bright, young people.

When asked if she had lost her passion for fashion, the first hijab-clad woman to appear in Vogue responded, “Oh, just a little bit.”

The Muslim model recalled how, as soon as stylists began dressing her, her hijab began to shrink with each shoot, to the point where she was asked where it was.

She continued, mentioning how one magazine cover made her appear like a “white man’s fetishized version” of herself, despite her advice to “Don’t change yourself, change the game.”

‘I’m not saying it’s wrong for other Muslim women who wear the hijab; I’m just saying it wasn’t right for me. Yes, all these identities set me up to be the ideal token to check all the boxes—I wear a hijab, I’m Muslim, and I’m Somali. I had the impression that I was a major token in the field. In my own career, I’ve always felt like an outsider.

She previously described to the BBC how horrified she felt when she appeared in the same magazine with a picture of a naked man inside.

She questioned why the publication believed it was appropriate to feature a Muslim woman wearing a hijab when a naked man was on the following page. She acknowledged as well that she felt compelled to “compromise” her religion.

The Miss Minnesota USA semifinalist claimed that due to her hectic schedule, she was unable to celebrate Muslim religious holidays with her family.

Heavy hitter Gigi Hadid, who advised followers to look at Ms Aden’s Instagram posts on the subject, supported her decision to leave the runway. 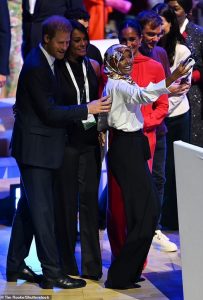