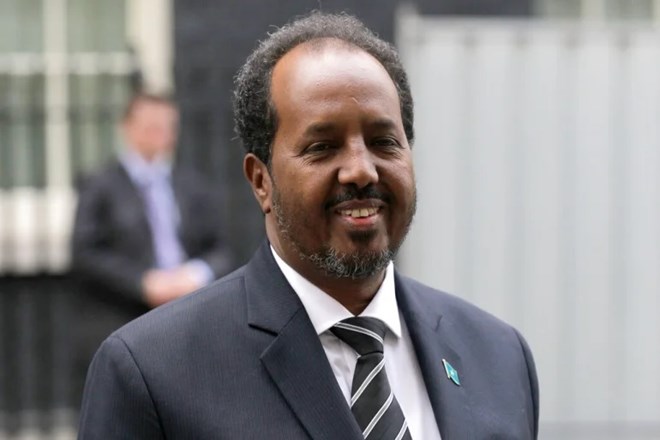 Both men advanced to the third round of what was likely the most contested election in the country’s history, which had more than 36 contestants. Mohamud, who is 66 years old, eventually prevailed and will now lead the Horn of Africa nation for the next four years.
Mohamud served as the head of the Federal Government of Somalia from 2012 to 2017, the first government formed following the end of a long period of unrest that began in 1991.

The longstanding civil society activist and educationist had only fully joined politics in 2011 when he founded the Union for Peace and Development Party.

Born in the town of Jalalaqsi, in the central region of Hiiraan, Mohamud obtained an undergraduate degree in technology from the Somali National University in the capital city of Mogadishu. He went on to get a master’s in technical education from Bhopal University in India and worked in the Somali education sector early on in his career.

In the 1990s, he gained a wealth of experience travelling through southern and central Somalia, promoting children’s education in the midst of raging violence.

Throughout the turmoil Somalia suffered in that period, Mohamud remained in the country, unlike a number of Somali leaders who sought asylum overseas.When United Nations peacekeeping forces, UNISOM, left the country in 1995, he partnered with civil society groups to spearhead reconciliation efforts to bring the warring clan factions together.

He became known regionally for his involvement in resolving these clan disputes and is remembered for the role he played in the negotiations in 1997 that ended the era of the infamous “green line” that had separated north and south Mogadishu since 1992.

Both men advanced to the third round of the country’s most contested election, which featured more than 36 contenders. Mohamud, 66, eventually won and will now be in charge of the affairs of the country.

Mohamud was a member of a local committee that successfully reunited the city’s two parts, which had previously been divided by two formidable rival clan strongmen – Mohamed Farah Aideed and Ali Mahdi Mohamed.

Residents of Mogadishu recall the so-called green line and the several people who were killed attempting to cross it. Mohamed Ahmed, a 69-year-old father of five, described the situation as “a death zone.”

“It cut off even close family members but after the line was removed everyone celebrated, the city came back to life and I remember Hassan Sheikh Mohamud was one of the people who helped us resume our normal lives.”

In 1999, Mohamud helped establish the Somali Institute of Management and Administration, which later became one of the biggest universities in Somalia.

Mohamud formed the Union for Peace and Development Party in 2011 and, as its leader, went on to challenge transitional government President Sharif Sheikh Ahmed.

In 2012, he was elected the eighth president of the country, running on a platform of a new federal Somalia with full diplomatic relations with the rest of the world after three decades of war and successive transitional administrations.

His government inherited several tasks, including completing the provisional constitution, forming federal member states, fighting al-Shabab – the al-Qaeda-linked armed group is fighting to overthrow the government and implement its strict interpretation of Islamic law – and building a strong national army that could ensure the country’s security.

But Mohamud was also able to bring regional leaders together to build consensus on critical national issues using what he called “nomad diplomacy” – the Somali cultural concept of elders sitting under trees to solve disputes, forgive one another and lead their clans to coexist peacefully – to resolve major differences

“Nomad diplomacy is very transparent, straight to the point and has no read-between-the-line issues,” he said in a 2013 TEDx Mogadishu promo video.

In September 2015, he established a national consultative forum that brought together leaders of regional member states to forge an inclusive electoral process. The forum was also instrumental in reaching major political consensus until it was dissolved by his successor, Farmaajo, who defeated him in the 2017 election.

After peacefully handing over power to Farmaajo, he continued active in the country’s politics and started building alliances to return to the presidency.

In one instance, the UN Monitoring Group accused the administration of giving weapons to clan militias and al-Shabab. The damning 2013 report particularly alleged a conspiracy between the president and a US law firm, Shulman Rogers, to “steal public funds”.

It said the Maryland-based firm conspired to divert the recovery of overseas assets belonging to the central bank of Somalia. The government denied the findings

Yussur Abrar, who was governor of the central bank at the time, resigned. She had only been in her position for seven weeks but said she could not continue because of corruption concerns.

In her letter to Mohamud, she said: “From the moment I was appointed I have been continuously asked to sanction deals and transactions
that would contradict my personal values and violate my fiduciary responsibility to the Somali people as head of the nation’s monetary authority.”

Returning to the presidency

In the last two years, Mohamud has been fiercely campaigning to unseat Farmaajo who the opposition accused of “taking the country back to dictatorship”.
In his election manifesto, he promised to build “Soomaali Heshiis ah, Dunidana Heshiis la ah” (a Somalia that is at peace with itself and at peace with the world).

In his acceptance speech on Sunday after being declared the winner of an election that had been delayed for about two years, he spoke in a reconciliatory tone from inside a heavily fortified tent in Mogadishu and promised to build an inclusive government.

After being sworn in early on Monday, Mohamud stood next to his predecessor and said: “Our country needs to go forward, not to go back … We will solve our problems using our existing laws, let’s not dwell on yesterday but think about tomorrow.”

But the next four years will be tough for the new leader who is inheriting a trove of challenges including the matter of al-Shabab, which has intensified its attacks and regained territories controlled by the government in recent years.

He will also have to build trust in a country polarised by in-fighting between the federal and regional governments, as well as tackle rising inflation and severe drought that is affecting millions of Somalis across the country.

During his campaign, he promised to run an inclusive government obedient to the rule of law and to drive economic reforms that will result in a self-sufficient Somalia able to feed itself.

But that is a tall order, analysts say.

“Hassan Sheikh is lucky, he is the first Somali president that got a second chance,” said Afyare Abdi Elm, executive director of the Mogadishu-based Heritage Institute for Policy Studies.

“He has sufficient experience and excellent understanding of major issues … [but] a lot will depend on how he manages the competing and irreconcilable groups/interests, high expectations of the society that want services, and resource mobilisation.”