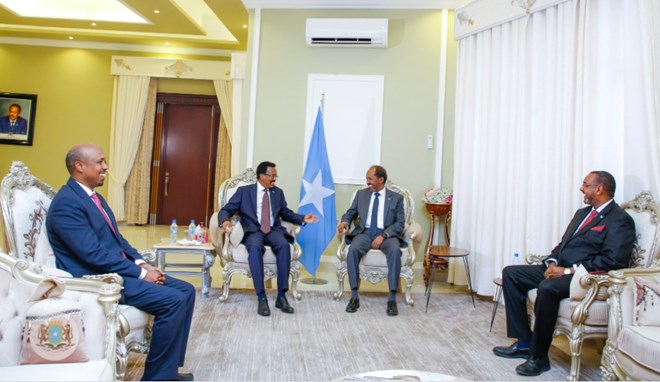 After a thorough transfer of power from departing President Mohamed Abdullahi Farmaajo, Somalia’s incoming President Hassan Sheikh Mohamud is due to take office on Monday.

Farmaajo gave Mohamud a tour of the presidential palace on Saturday before the handover, taking him through several ministries of the administration.

Mohamud won the election in the Horn of Africa country on May 15, receiving 214 votes against Farmaajo’s 110 votes in the third round.
The newly-elected President promised to work for peace at the conclusion of the process.

“Let us consider tomorrow rather than yesterday and what transpired. For the sake of my people’s dignity in the world, I will work toward a bright tomorrow and a lovely future.I will implement my motto: Somalia at peace with itself and with the world,” Mohamud said in his victory speech.

On his part, Farmaajo conceded defeat and wished the new leader well in his tenure.

“I want to welcome and congratulate the new President my brother Hassan Sheikh Mohamud, we pray for the almighty to help him in this difficult task, it is not an easy task and we are very ready to closely cooperate and work with him,” he said.