Horn is experiencing a severe drought that has caused starvation. 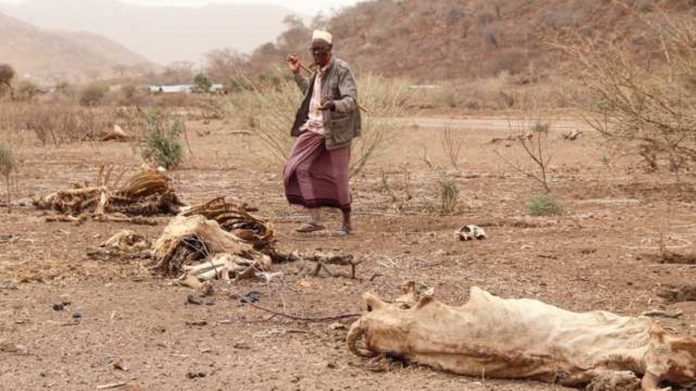 Following a fifth consecutive year of drought in their driest regions, Kenya, Somalia, and Ethiopia may experience longer periods of food shortages.

According to a situational report from the UN Office for Coordination of Humanitarian Affairs (Ocha), at least 36 million people in the Horn of Africa will experience drought by this October, and if the rains do not improve, the number could increase to 80 million by the end of the year.

Ocha claims that two districts in the Bay region of southern Somalia are on the verge of starvation despite the fact that famine may not result from drought given the widespread food shortage.

According to Ocha, the rains in the upcoming months will be just as insufficient as in previous seasons.

According to the UN agency, Ethiopia is currently the country hardest hit, with 24.1 million people in need of food assistance as a result of drought that is made worse by the conflict in Tigray.

4.2 million people in Kenya and 7.8 million people in Somalia also require food. When combined, the number is double what it was in 2021.
This past week, nations made promises to aid Somalia outside of the UN General Assembly, with the US Agency for International Development (USAid) pledging $151 million for food and “resilience and economic recovery.”

Early in the crisis, coordinated international action could have halted the spread of hunger. Abdirahman Abdishakur, the special representative for drought relief for Somalia, declared that we urgently need assistance to prevent famine.

Ocha pointed out, however, that although a drought may have destroyed some food sources, the world’s crises are to blame for elevated food prices.

According to the most recent Food Security and Nutrition Working Group Drought Special Report, at least nine million livestock have perished in the three countries, severing a vital lifeline for pastoralist communities.

“Pastoralist communities in the most severely affected areas face an existential threat due to the severity and duration of this drought. Experience has shown that it takes a pastoralist family at least five years to rebuild their herd following a drought. But given that so many families have lost all of their livestock due to the drought, some may be forced to give up pastoralism, Ocha warned in a bulletin on Wednesday.