In Djibouti, the Somali Defense Minister meets with his counterpart. 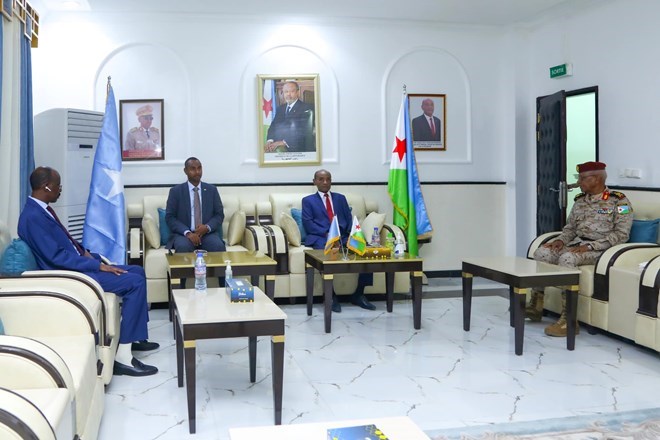 Somali Magazine -In Djibouti on Monday, Hassan Omar Mohamed Burhan, the defence minister of Djibouti, and Gen. Zakariye Sheikh Ibrahim, the commander of that country’s armed forces, met with Abdulkadir Mohamed Noor, the minister of defence of Somalia.

According to Minister Abdulkadir Mohamed, they talked about the security situation in Somalia and how to defeat al-Shabaab in order to bring about peace.

Hassan Omar Mohamed, the defence minister of Djibouti, emphasised the importance of Somalia’s stability for the entire region and reaffirmed his nation’s commitment to supporting Somalia in its conflict with al-Shabab.

The ongoing offensive against al Shabab in various parts of the region has not involved Djiboutian forces supporting African Union forces based in Beledweyne, the Hiiraan region’s capital.

In an operation in the Masjid Ali-Gadudd and Bur-olow, also known as Doilile, the Somali military, NISA, and international partners worked together, according to the Somali Ministry of Information, killing more than a hundred Al Shabaab militants over the course of operations over the weekend.

The focus of recent local community mobilisation efforts against al-Shabab has been Beledweyne, which is located about 300 kilometres north of Mogadishu.