In Jinja, 20 Arsenal fans were jailed after a ‘premier league’ trophy parade. 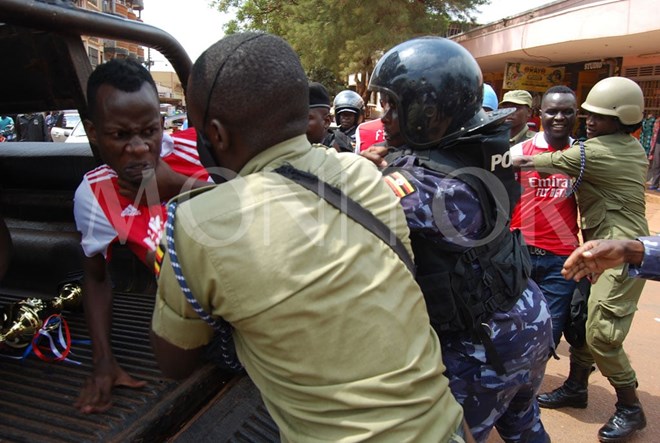 Police in Jinja have detained at least 20 Arsenal supporters in connection with a trophy procession on the city’s streets following the club’s 3-2 upset of rivals Manchester United on Sunday.

The Premier League leaders defeated the Red Devils at the Emirates Stadium thanks to Bukayo Saka’s goal and an Eddie Nketiah brace, with the winning goal coming late in the game after a VAR intervention. United’s Marcus Rashford and Lisandro Martinez scored in a tense contest that sent Arsenal five points ahead of title rival Manchester City.

A day later, police stopped a group of ecstatic Arsenal fans as they attempted to join Iganga Road from Main Street in a convoy of roughly five vehicles.

While the police have not commented on the arrest, Baker Kasule, a member of the group, told this reporter that a police patrol vehicle parked in front of them and instructed each of them to exit and enter into the patrol car, which was headed to Jinja Police Station.

“I’m not sure what we did, but we were simply enjoying our triumph over rivals Manchester United,” Mr Kasule explained, adding that “there are a total of 20 supporters, all from Jinja City.”

The officer in command of Jinja Police Station, Mr Maurice Niyonzima, declined to speak, stating that the Force has a spokeswoman.