In Lasanod, there is a market space for Somali women hawkers. 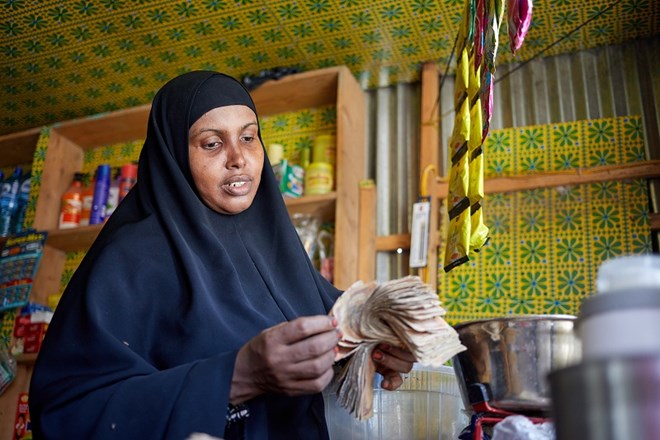 Since moving off the streets and putting up her butchery shop in a new hawkers’ market in Lasanod, Somalia’s Puntland state, Asha Ali Mohamed has seen a significant boost in her earnings.

“This location is far superior to where we previously sold our wares. After relocating to these booths, our business began to flourish. “I used to sell three kilos of meat a day, but now I sell seven, and I’m getting between $20 to $25 on some days, whereas before I would only make four dollars,” Asha explained.

Asha, a mother of eight, had been selling meat on the streets of Lasanod for almost 30 years. She was one of roughly 100 street vendors allocated a three-meter stall on March 15th.

The stresses of street selling were numerous. Earnings were poor because Asha had to keep moving from one street to another. Keeping good hygiene for consumable goods like meat was hard. She and other hawkers faced constant harassment from the local police chasing them away to traffic prevent congestion. They were also chased away by shop owners not wanting hawking in front of their doors.

“We had big challenges. Speeding vehicles threatened us, and we faced the wind and the hot sun. Now though we are safe from all those problems,” Asha said.

Another vendor, Koos Ahmed Farah, underscored the importance of this market for the women’s businesses. In her first six weeks in Nafaqo, she increased her takings from six dollars to around $20 to $25 a day.

“A lot has changed. We get big profits from our sales. I can even leave this stall under the care of my children. We no longer have to fear rain, wind, or speeding vehicles,” said Koos, who was a street vendor for 10 years. For the first time, she is happy to have been able to pay for enrolment of her four children in a primary school in Lasanod.

The market was built by Lasanod local authority at a cost of $40,000. The stalls have access to a table and a refrigerator ensuring better food hygiene.

The secretary of Lasanod local authority, Abdikarin Dubbed Boos, told Radio Ergo they aimed to create a conducive business environment for the women allocated a stall in Nafaqo.

“We gave stalls to the most deserving street vendors. We were very careful when we were making the list, only the people who had the right to get a better place were chosen. These women were conducting their businesses on the street under the hot sun, and their commodities like vegetables and more so meat were exposed to poor hygiene on the street. Where we have moved them now will be their place permanently, ” he said.