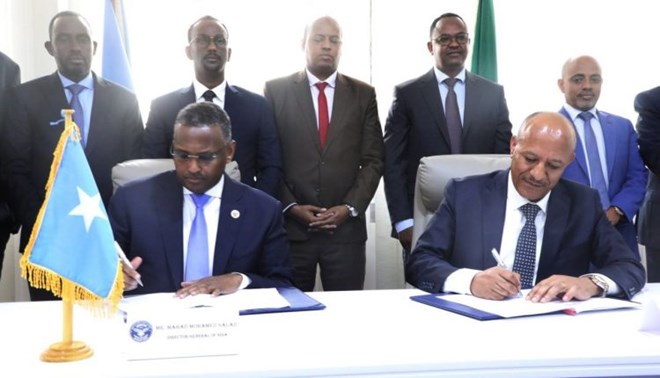 Somali Magazine –An agreement to cooperatively fight terrorism was signed by the Somalian counterpart of the Ethiopian National Information and Security Service.

In order to coordinate information exchange and collaborative efforts to fight Al-Shabaab, a menace in the Horn of Africa, the Ethiopian National Information and Security Service and its counterpart in Somalia have signed a memorandum of understanding.

Temesegen Tiruneh, the NISS DG, expressed his profound sorrow over the most recent terrorist attack by al-Shabaab in Mogadishu.

He said that his organisation has been researching the terrorist group’s communication network since it poses a threat to not only Ethiopia and Somalia but also the entire Horn of Africa.

Temesgen stated that NISS will share information with Somalia’s information and security authorities, support operations in particular locations, and offer multidimensional help because it is still actively monitoring the group’s members.

General Mahad Mohamed, the director general of Somalia’s National Intelligence and Security Agency, stated that the Al-Shabaab terrorist organisation is becoming a greater menace to the Horn of Africa as it conducts assaults both inside and outside of Somalia’s borders.

According to him, the intelligence and security agencies of Ethiopia and Somalia should collaborate in order to take out the leaders and cells of the terrorist organisation that operates in both countries in order to end the threat they provide to the HoA region.

Mahad Mohammed added that Ethiopia has extensive skills and knowledge in thwarting terrorism.

The deployment of a coordinated anti-Al-Shabaab operation and securing long-term peace and security in the HoA region, along with the implementation of the cooperation agreement agreed through intelligence sharing, are what he said will produce results.